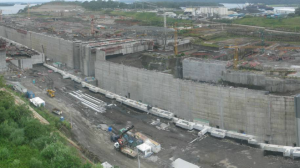 The expanded Panama Canal, a massive project that included new locks on both the Atlantic and Paciﬁc sides, a new six-kilometre access channel, and widening and deepening at several locations along its 80-kilometre length, opened on June 26th, 2016. We reported on it in an earlier issue and now it’s time to look at its impact just over a year on.

In the ﬁrst year, according to the Panama Canal Authority, ships transiting the expanded canal have carried nearly 25 million more tons of cargo than anticipated, however, low oil prices have presented a challenge, as the canal becomes competitive only when oil is above US$55 a barrel.

Some ocean carriers opt for longer routes around the Cape of Good Hope on return voyages, in order to avoid canal fees. To remedy that, the Panama Canal Authority has been offering discounted rates for ships on return voyages, but the competing Suez Canal in Egypt also cut its tolls last August.

Some of the milestones achieved by the Panama canal expansion in its ﬁrst year include:

While work on the expansion proceeded in Panama, parallel projects were underway on the US Gulf and North East Coasts, to accommodate bigger vessels: the ports of Miami and Savannah dredged and widened shipping channels and the Port of New York and New Jersey completed its raising of the Bayonne Bridge’s roadway this June.

Currently, 15 out of 29 liner services that use the Panama Canal now employ neo-Panamax vessels to take advantage of the economies of scale offered by the expanded canal, the majority of which connect ports in Asia and the US East Coast.

This has added capacity in the east but how full are the ships? Carriers don’t routinely publish this information so we will have to look at yearly volumes after the Thanksgiving-Christmas peak season to see how much cargo has actually shifted from west to east.