September 10, 2018
by Inside Logistics Online Staff 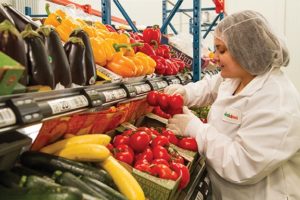 Workers specialize on 20 to 30 fresh items to ensure quality.

September 10, 2018
by Inside Logistics Online Staff

New York city-based online fresh food grocer FreshDirect has opened its FreshDirect Campus (FDC), a brand new state-of-the-art facility in New York City’s South Bronx community. The facility will permit the company to add thousands of new products and speed up its expansion into new territories with its three brands, FreshDirect, FoodKick, and FreshDirect At The Office.

The DC is equipped with 15 km of conveyors.

Using just one refrigerated central food facility uses significantly less energy to protect the cold chain and ensures a huge fossil fuel reduction compared to retail brick-and-mortar operations. Unlike a traditional grocery store, the FDC has temperature-controlled areas designed to best handle and store meat, seafood, produce, deli, bakery, and prepared food items along with a specific freezer room for ice cream and refrigerated rooms for bananas, tomatoes, and onions to make sure each item is in optimal food conditions.

As well, the carts and pallets used at the FDC are specifically designed for new delivery methods and make for easy truck loading and unloading so orders can be delivered faster. While the new technology means fewer touches, the food will be picked by specialists they call “personal shoppers” who will work with the same 20-30 fresh items each day so they can quickly pick the best produce. Picking will be done on a produce-to-person basis, which the company believes will improve ergonomics and working conditions.

This is backed by a custom internal quality control app, FDQC, that will monitor, track, and widely share daily quality ratings of every fresh item, enabled by real-time inspection decisions.

“The launch of the FreshDirect Campus is the culmination of 16 years of learnings that have enabled us to reinvent the grocery industry with customer experience, food quality, and sustainability at its core,” said FreshDirect CEO and co-founder, Jason Ackerman.

“This marks a pivotal moment for our business, while positioning us for future growth. We can also better serve the community by providing greater access to fresh food and significantly reduce food waste, cardboard use, and energy consumption. We are thrilled to officially be a part of the Bronx community and are very thankful for the local support we’ve received throughout this journey.”

FreshDirect has hired more than 1,500 employees from the Bronx since 2014.

The FDC is equivalent to 50 grocery stores, and because of its centralized location, it provides a more efficient means to reallocate perishables to FreshDirect’s long-standing partners City Harvest and the Food Bank for New York City in the fight against hunger. FreshDirect has donated more than 19 million pounds of food – representing 16 million meals – to help feed New Yorkers in need across the five boroughs.