Mercedes Benz rolls out Vision Van with drone on board 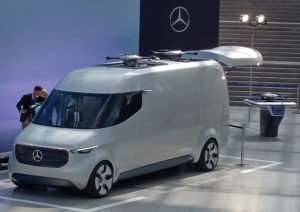 Sleek and futuristic on the outside, and supremely practical on the inside, the Mercedes Benz Vision Van is a concept vehicle designed for modern last-mile deliveries.

On display at the International Transport Forum, the one-off concept van was demonstrated by Thomas Moser, manager of prototypes with Daimler AG. It is designed to increase efficiency by allowing drones to makes deliveries at the same time as the driver moves from stop to stop. 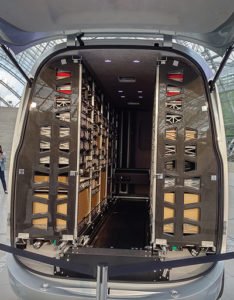 The interior of the van contains a fully automated storage system that sends parcels to the driver as needed. (Emily Atkins photo)

Based on a Sprinter—which Moser said the eventual production model will look like­—the Vision Van has two drones parked atop its high roof, while the interior is fitted with a fully automated storage and retrieval system (AS/RS).

The AS/RS until is modular, with adjustable racks and shelves that can accommodate parcels of varying sizes. It can also be completely removed from the van, sliding out on rails for loading, while another full unit is swapped in, saving time at the distribution centre’s loading docks. While loading a conventional package van can take up to 90 minutes—time that the van cannot be on the road—the Vision Van’s modular AS/RS can be loaded in just five minutes, by an AGV.

When it comes time for a delivery, the AS/RS can do one of two operations. If the parcel is to be delivered by the van’s human driver, the AS/RS selects the parcel and places it on a shelf adjacent to the driver’s cabin. The driver then opens a hatch on her way out the van’s door, grabs the package and heads to the recipient’s door. 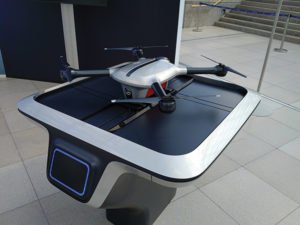 The drones use a dedicated landing pad. (Emily Atkins photo)

The other option is for the AS/RS to move the parcel to a hatch in the van’s roof where it gets loaded onto the drone’s carrier. The drone then flies the parcel to a set delivery point—it requires a special landing pad, so cannot deliver to a customer’s door—and leaves the parcel.

If the van is on the move, the drone can find it using an infrared guidance system and will follow along until it can land safely back on the roof at the next stop.

Although it’s a concept, the Vision Van has specs. The drones can travel a maximum of 20 kilometres at 60 km/h with a two-kilo payload. Each van would be equipped with three battery packs, and the drone gets a new one with each delivery to ensure maximum range. The 11-kg drone takes 40 seconds to drop a parcel on the landing pad. 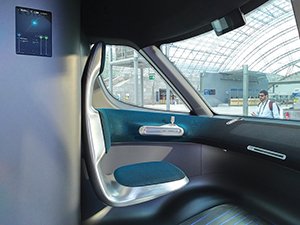 The cockpit is minimalistic, designed
for ergonomics. (Emily Atkins photo)

The van itself is joystick controlled with an ergonomically designed cockpit that at first glance looks empty but for a chair. A typical delivery driver is in and out of his seat 150 times a day, a fact that was taken into account in the design, Moser said.

Routing is optimized and managed over a cloud-based server, relying on GPS for navigation and avoidance of congestion to make trips as efficient as possible.