Canada's auto industry can learn a lot from the UK experience 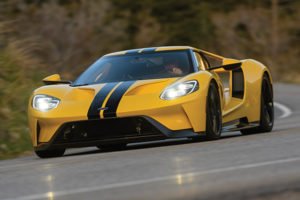 Ford Motor Company’s GT is a great example of a car that depends on cross-border trade. It is assembled at Multimatic in Markham, Ontario with parts from multiple sources. (Photo: Ford)

We hear a lot about the uncertainties the Canadian automobile industry faces due to the NAFTA renegotiations, and rightly so, since many Canadian jobs depend on it.

Looking across the Atlantic, there are similarities with the uncertainties Brexit has brought to the UK automobile industry: There is no Canadian brand of automobile but several foreign brands have assembly plants in Canada – Fiat Chrysler in Brampton and Windsor, Ford in Oakville, GM in Oshawa and Ingersoll, Honda in Alliston, and Toyota in Cambridge and Woodstock. These plants rely on the free movement of parts and assembled vehicles between Canada, the US and Mexico made possible by NAFTA, as automotive supply chains crisscross the continent.

Vehicles assembled in any NAFTA country contain parts produced in all three. Every year, Canada produces around 2.4 million vehicles, 85 percent of which are exported to the US, while about 900,000 vehicles assembled in the US are imported into Canada. Closely integrated into NAFTA, the Canadian automotive industry is a major contributor to our economy and employs over half a million people.

Although theses famous brands are no-longer locally owned, they still have assembly plants in the UK, and in addition to these, several global brands manufacture automobiles there, namely Ford, Honda, Nissan and Toyota. The UK car industry, which employs close to 800,000 people, has enjoyed a renaissance over the past two decades, thanks to investments made by foreign car makers, premised on the UK being a member of the EU, which enabled the export of UK-made vehicles to continental Europe without incurring tariffs.

Brexit poses two big challenges to car makers with UK plants. First is the period of uncertainty during the Brexit negotiations. They could last at least two years and prompt these manufacturers to place important work on model upgrades with their operations elsewhere in the world.

Second, if the UK’s access to the EU single market after Brexit involves trade barriers, tariff and/or non-tariff, some UK car factories could close as they become uncompetitive. And, in the meantime, companies are unlikely to make new investments in the UK, as long as there is uncertainty on tariffs.

To illustrate these challenges in logistics terms, every day, 1,100 trucks deliver some CA$60 million worth of parts and components from continental Europe to UK vehicle and engine plants. And every day, these components help build 6,600 cars and 9,800 engines, the bulk of which are then shipped back to EU customers and assembly plants. In 2016, 80 percent of the UK automobile production was exported, of which 52.8 percent went to the EU. And the other way around, 81 percent of vehicles imported into the UK came from the EU.

Thanks to NAFTA, most Customs tariffs within the region are at zero percent, providing goods meet specific rules of origin, i.e. at least 50 percent of the net cost of auto parts must originate in the region. The UK’s integration with the EU goes way beyond NAFTA, since there is no border for goods within the 28-nation union, no Customs and therefore, no tariffs.

During the Brexit negotiations, the UK government repeats that their objective is a “frictionless’’ Customs border. This may seem a bit unrealistic, as it’s hard to see how a country could leave the EU and still expect trade to flow without borders and/or tariffs. As the saying goes, it’s like having your cake and eating it too.

To realize the importance of our bilateral trade, let’s look at the relative sizes of our economies and of our trade with our respective partners. In 2016, the EU was the UK’s largest trading partner, with UK exports of goods to the EU reaching $405 billion (43 percent of total UK exports) while UK imports from the EU stood at $545 billion (54 percent of total UK imports).

Canadian exports of goods to the US stood at $366 billion (76 percent of total Canadian exports) while Canada imported $267 billion worth of goods from the US (53 percent of the total). As to our economies, the US GDP represents about nine times Canada’s and the EU’s GDP also represents about nine times the UK’s GDP, so we are in a situation similar to our UK cousins across the Atlantic.

The big difference is the UK has chosen to leave the EU – albeit by a very narrow margin – in a referendum held in June 2016, while it was not Canada’s decision to put NAFTA in question and renegotiate the agreement.