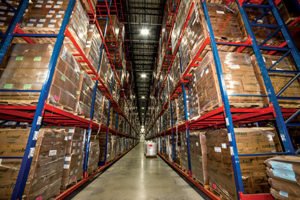 Sprinklers typically used in warehouses to control and suppress ﬁres have sprinkler heads that activate individually through heat detection. (Photo used with permission of Johnson Controls.)

August 2018 –Fire breaks out at a warehouse in Cobourg, Ontario. Global News reported at the time that excessive smoke throughout the building prevented ﬁreﬁghters from quickly ﬁnding the source of the ﬁre (it was later determined to be batteries). Shortly after, in September last year, a warehouse near Paddy’s Pond, Newfoundland was quickly and completely destroyed by ﬁre. Firefighters arrived in the middle of the night, and NTV news reported that multiple explosions went off due to propane and diesel stored on site.

These are but two of the most recent examples of warehouse ﬁres in Canada. For all the good work the supply chain and warehousing industry does in safety training and putting prevention measures in place, ﬁres still occur. Indeed, Allianz (AGCS) recently released a global insurance claims analysis (of over 470,000 claims from 2013 to 2018 from over 200 countries) which found ﬁres and/or explosions to be the largest source of ﬁnancial loss.

Warehouse environments present challenges for ﬁre detection and suppression. According to UK-based Fire Safety Services (in a recent blog post), the general dirtiness of warehouse environments affects “the performance of traditional detection systems, generating false and potentially missed ﬁre alarms – and smoke dilution due to ceiling height, stratiﬁcation, natural and mechanical ventilation can lead to delayed detection and false alarms where traditional detection is used.”

That’s why both Fire Safety Services and other ﬁrms such as Xtralis (now part of Honeywell, and based in Maryland) recommend ASD technology: aspirating smoke detection. ASD systems work by drawing in air samples and testing them rapidly with a combination of lasers, imaging and photodiodes. The technology has been used for many years in settings like cleanrooms and data centres where early smoke detection is extremely desirable.

Xtralis explains in its literature that compared to traditional spot smoke detectors and other technologies, ASD “dramatically improves warehouse facility safety by detecting smoke at the earliest possible stage via numerous sampling points.”

Elley Klausbruckner, owner of Klausbruckner & Associates, a California-based consulting ﬁrm specializing in high-pile storage, hazardous materials, ﬁre/smoke spread and more, says that smoke detection alone is not legal in the U.S. in most warehouses (since most will have some form of plastics products) having greater than an area of 2,500 square feet of high-piled storage.

“The strategy of using smoke detectors which alert the local ﬁre station to respond could only be used in speciﬁc small warehouse instances and ﬁnancially feasible where sprinklers are not desired,” she notes.

“One example would be thousands of fur coats in a small warehouse. Some companies will also segregate a building so that there are several ‘warehouses’ that are 2,500 square feet each to avoid the legal need for sprinklers, but it’s not at all common.”

Klausbruckner says smoke and heat detection might be used as part of the sprinkler system activation in refrigerated/freezer warehouse spaces. John Galt, president of the Canadian Automatic Sprinkler Association adds that in a low-temperature environment, non-toxic ‘antifreeze’ substances are added to the system to prevent sprinkler water from freezing.

“And at, for example, a McCain Foods warehouse where most of the goods are frozen in plastic bags, there may also be products in other parts of the warehouse that are not frozen, so the system can be designed for all that,” he explains. “You can also have ceiling units or in-rack sprinkler systems or both.”

The sprinklers typically used in warehouses to control and suppress ﬁres have sprinkler heads that activate individually through heat detection (activation occurs once the temperature of the immediate area exceeds the thermal limit of the head). Galt explains that activation temperatures are selected based on the hazard of the materials being stored in the warehouse and the characteristics of the warehouse itself (building height, height of storage, rack conﬁguration, etc.). “There may be heat detected in one area of the warehouse, a small ﬁre in one corner, and you might have only one head go off,” he says. “In fact, over 95 per cent of all sprinkler activations are only one or two heads.”

He adds that the rate of false alarms with sprinklers is very much lower than it was in the past.

Along with temperature activation ratings, sprinkler systems also have ratings guiding settings for how much water heads will release in a given warehouse, again depending on type of goods stored and other factors. Overall, Galt notes that sprinkler innovations over the last 20 to 30 years have focused on less water, applied quickly.

However, a newish sprinkler system that uses a lot of water is becoming more common in warehouses, according to Klausbruckner. ESFR systems (Early Suppression, Fast Response) were developed in the 1980s as an alternative to in-rack systems – designed through the release of two to three times the amount of water released by conventional sprinkler heads (and the use of larger droplets as well) to actually suppress or extinguish a ﬁre, while conventional sprinklers can only control ﬁres.

But while these systems are excellent in many applications, Klausbruckner notes that they are not an all-inclusive solution to warehouse ﬁre protection. “It’s becoming the standard in new warehouse buildings, but it’s important to remember that different ESFR systems should be used to protect certain products,” she explains.

“Some real estate companies tend to say to potential building buyers, ‘This building has an ESFR system, it’s ﬁne for you,’ but that’s not necessarily true.”

In general, ESFR systems can be used in warehouses with storage racks 40 feet high or less and ceiling height of 45 feet. While they can protect a wide array of commodities, Klausbruckner says “there are different ESFR sprinkler heads and there may be limitations on what products/commodities the system can protect properly, and the design must also be analyzed to make sure it’s suitable for the storage conﬁguration.”

She adds that if the storage situation requires in-rack sprinklers to be installed, warehouse owners often prefer to change over to ESFR (if an option is available) to minimize the chance of damaging in-rack sprinkler heads (i.e. water damage to products from damaged in-rack sprinklers) during normal storage operations.

“Also, in-rack sprinklers have to be removed and sometimes replaced with each new tenant, since the tenants own the racks,” she notes. “Therefore, converting to ESFR might be more cost-effective in the long run.”

On the subject of warehouse tenants, Klausbruckner points out that in the U.S., each new tenant in a warehouse is required to apply for a ‘high-pile storage permit,’ which includes ﬁre protection systems including suppression systems that meet code and apply to speciﬁc materials being warehoused.

However, in Canada, Galt reports that the situation of a change in warehouse occupancy is his “biggest challenge.” While the onus to ensure proper ﬁre detection and suppression is on the tenant and/or building owner, Galt says “a new tenant might think ‘Well, I’m only going to be in here for a year or three years, so I’m not going to bother.’ And the change in occupancy can take place outside the eye of the local ﬁre authority and Fire Code requirements.”

In 2014, a warehouse rental was the site of an enormous blaze in Etobicoke, Ontario. It was a mattress factory/warehouse ﬁre, which CBC News reported “sent massive smoke plumes into the sky that could be seen across the city.” Afterwards, the building was slated for likely total tear-down and damage was estimated in the millions of dollars.

At the time, Galt was interviewed by CBC and wondered, because of the speed and size of the ﬁre, if the sprinkler system was up to code. “A properly designed system would be putting a larger volume of water on a given ﬁre in an average scenario,” he said. “It would control the ﬁre for the ﬁre department to respond.”

When asked about that ﬁre now, Galt says that he believes the sprinkler system didn’t come on at all. “The warehouse had been vacant for a while, and the owner didn’t want to heat it, which is understandable, and so you drain it and turn it off,” he says.

“But it’s obviously important to get a system working again and inspected when it’s occupied again. And no matter what system is already there, you need to make sure it applies to the materials and storage systems of the tenant, and that may require extensive work or an entirely new system.”