If your DC employees have ever complained about the ambient temperature in their working area, read on. Staples Canada has managed to reduce energy costs by almost $20,000 a year and at the same time maximize employee comfort in its 50,000 square-foot Mississauga DC, just by installing five ceiling fans.

At the DC, Staples relies on a rooftop gas heating system to keep the massive space warm during the winter, but it was an ongoing challenge given the 30-foot ceilings, where the hot air pooled, and the shipping doors at the unloading docks that constantly open and close.

“It’s a lot like an oven, in that it will always be hotter closer to the heating element but eventually the entire oven will heat up,” says Dan Modestino, energy incentive rebate manager at Sandcastle Energy Systems, in Mississauga.

During the colder months, because the heating system’s thermostat is within eye and arm’s reach of the average person, the furnace is reading the cooler air closer to ground level and subsequently cycling on and off more frequently, which also consumes more energy.

Not only was the system expensive and inefficient year-round, employees were sometimes cold in the winter and often hot in the non-air conditioned space in the summer, which could affect motivation and performance. To see how temperature-related discomfort affects people, please see the sidebar.

“One of the largest challenges with a warehouse space is keeping it cool in the summer months. A warehouse is like a big steel box that generally isn’t air conditioned, and lacks air circulation,” says Modestino.

To even out the DC’s air temperature, making it feel warmer in the winter and cooler in the summer, Staples’ building managers knew they needed to circulate and mix the air. The existing equipment included a number of 36- to 48-inch diameter ceiling fans, as well as wall-mounted and floor fans. However, those fans were too small to effectively move large volumes of air, and also had to turn very quickly to compensate for their lack of size, which in turn consumed more energy.

Efficiently and cost-effectively air conditioning a space as large as the Staples warehouse would be virtually impossible. Fortunately, however, mixing the hot air that collects at the ceiling with the cooler air below will help equalize the building temperature from floor to ceiling and wall to wall. 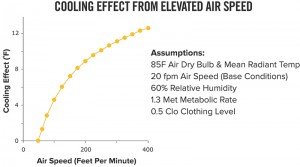 As well, Patrick Wilson, new construction sales manager for Big Ass Solutions in Mississauga, notes that air speeds below 40 feet per minute (FPM) are imperceptible, but anything over 40 FPM will have a cooling effect. For example, ASHRAE’s (ASHRAE is a global society whose members focus on building systems, energy efficiency, indoor air quality, refrigeration and sustainability) Thermal Comfort Tool (http://comfort.cbe.berkeley.edu) indicates that air that is actually 85⁰F (29⁰C) moving at about 120 FPM will feel about 3⁰C or 5⁰F cooler, but at 200 FPM it will feel about 6⁰C or 9⁰F cooler.

Wilson also notes that in the summer, Big Ass recommends running the fans faster to provide higher airspeeds and below 40 FPM in the winter to circulate the warm air.
Surface area or size, speed/velocity of the fan airfoils and angle of attack are the three factors that affect air movement and determine just how far a fan can throw the air around it. In a warehouse, a small fan can move air around in the immediate ceiling area but unlike an oversize fan, it can’t push it down 20 to 40 feet at speeds of 90 to 100 FPM.

Big Ass Solutions, which began as HVLS Fan Company (high-volume, low-speed) in 1999, has a research and development lab built specifically to test large-diameter fans. The firm designs, engineers and manufactures overhead and directional fans for commercial, industrial and residential applications and holds 145 patents with another 135 patents pending. Fans range in size from 18 inches to 24 feet in diameter.

“In our market, supplier stability and longevity are always a big concern; Big Ass Solutions has been around since 1999 and has one of the best warranty programs in our market with 15 years on the gearbox and motor and a lifetime warranty on the airfoils, hub and airfoil to hub connection,” says Modestino. “As well, their commitment to design, engineering and constant research and development consistently results in new, improved products.”

It is estimated the five fans at Staples’ Mississauga DC will save the firm about 100,000 kWh per year and reduce its annual natural gas consumption by 27 percent or $19,313. As well, the electricity and natural gas savings respectively earned Enersource and Enbridge rebates, that when combined met more than one third of Staples’ total retrofit project costs. Energy rebate information can be obtained from local utility providers.

A Big Ass fan, which in most commercial and industrial applications is aluminum rather than composite or bamboo, requires about 1,300 watts but it moves more air and uses less power than 40 smaller fans. Big Ass Solutions’s one- to two-horsepower, magnetic direct-drive motors generally run at 43 to 130 rpm, compared to the 800 rpm of a smaller, faster fan.

“Hold your hand straight and then at an angle and you’ll understand how the angle of attack affects how much air you move,” says Wilson. “Our fan airfoils are shaped to maximize the air flow while minimizing the drag for improved efficiency.”

Despite, their size, each fan creates 55 decibels or less, which is comparable to the background noise generated by a large office, a typical suburban neighborhood or a moderate rainfall. For the sake of comparison, power tools are typically 80 to 110 decibels, a car horn is about 140 decibels and the human voice is about 70 decibels.
To maximize the fans’ impact on air flow and temperature, while ensuring the safety of employees, equipment and product, placement is key. For example, locating a fan directly above a shelf is pointless as the shelf and products are being cooled rather than the employees.

“Each facility is different so staff is on hand to look at the layout and the application to determine whether a particular placement will work,” says Wilson.