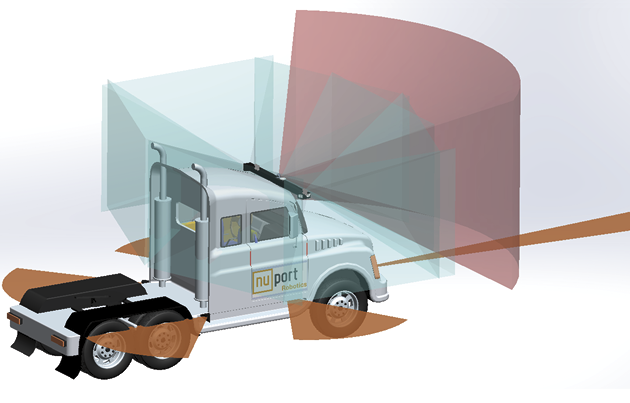 By building a Canadian centre of excellence for autonomous driving, NuPort Robotics aims to provide jobs for AI specialists.

A lot of effort is being put into developing autonomous trucks all over the world. It’s widely recognized that the technology, once realized, will deliver better fuel economy and help alleviate the driver shortage.

But it’s a big challenge to create the technology that will be safe, fully autonomous and able to navigate ever-changing real-world challenges such as weather, traffic, humans and new routes. That’s why Canadian autonomous trucking startup NuPort Robotics is tackling a very specific subset – the middle mile.

The Toronto-based company is the brainchild of Raghavender Sahdev, who acts as its president and CEO, and his partner, Bao Xin Chen. They started it up in March 2019, with help from the MaRS innovation centre, and aim to make Canada a centre of excellence for autonomous driving.

Sahdev, who is 26, first came to Canada from India as a Mitacs intern at the University of Toronto and then went on to earn his Master’s in Computer Science at York University. Mitacs is a not-for-profit organization that fosters growth and innovation in Canada by promoting research solutions from academic institutions as solutions to business challenges.

Solving for a niche

After eight years studying autonomous driving and robotics, Sahdev says they realized the challenges were hard to overcome. To eliminate some of those hurdles they decided to focus on the middle-mile niche. This means routes of one to 25 kilometres, typically between a manufacturing plant and warehouse, or any repeatable, set route.

“We wanted to make the problem specific so that you’re only solving for a given set of repeatable routes – routes that are known prior to deployment of the technology,” Sahdev explains. “Then you can tailor your algorithms to be performing optimally in those regions.”

The target market for their product – which will be offered on a robotics-as-a-service model, retrofitting customer trucks with autonomous features – is third-party logistics suppliers, retailers and automotive manufacturers that do regular shuttle runs between plants and warehouses. A major Canadian retailer is already working with NuPort Robotics to pilot the technology.

Sahdev explains that targeting the middle mile means they can focus on achieving Level 4 autonomy, in which the vehicle is fully self-driving, but within a specific set of parameters. “It’s got to work in all weather conditions, and at different times of the day. We know the route prior to deployment of the technology. Those are some of the conditions that need to be met,” he says.

NuPort is focusing on retrofitting class 8 trucks that haul 40- or 53-foot containers, with a payload of around 15,000 kilograms. But Sahdev also notes that they want to work with electric vehicles. “We know that autonomous vehicles already reduce gas consumption,” he says. “Electric trucks make the whole supply chain process much more cost efficient. So we want to actually drive a transition from traditional diesel fuel trucks, towards electric trucks, which reduce carbon emissions significantly.”

Sahdev says they are several years away from being able to deploy the trucks, largely due to the importance of ensuring the vehicles will be completely safe. “For us safety is paramount. So we want to ensure a commercial deployment of a well-tested system and that’s going to take us some time,” he says.

Right now they are in the data acquisition phase, which they are working on with their retail test partner. Once that is complete they move to off-line evaluation. Simulations are next, followed by testing in controlled environments. Only when the vehicles have been proven safe will they move to public routes. “In an ideal world there should not be any deaths, and autonomous features should prevent the loss of life,” Sahdev adds.

While on-the-road testing and the need for a licence is still several years away, the company has been working closely with Ontario’s Ministry of Transportation and other jurisdictions. “We’re also actually blessed and privileged to be situated in Ontario, which is one of the leading jurisdictions globally when it comes to autonomous vehicle technology development,” Sahdev says. He notes that the support of various government organizations has been instrumental in bringing the project this far.

Practical considerations for the deployment of the autonomous trucks include how they will interface with people and facilities at either end of the route. At first there will be drivers on board, Sahdev says, for safety, but also because drivers do a lot more than just pilot their vehicle. They are involved with a whole range of other tasks like fuel changes, parking, maintenance, repairs, inspection, communication with dispatchers, and so on.

For example, at the loading dock doors a driver typically takes responsibility for the docking and locking process as well as any vehicle inspections. Then a driver is usually also involved in paperwork transfer or logging of loads at the entrance and exit of the yard. Until these processes are completely paperless, a human attendant will be required to ensure that the trucks are loaded safely and properly documented

Sahdev notes that making the middle mile autonomous will help alleviate the continuing truck driver shortage, and will also help to create new forms of employment. Once the technology advances far enough that the driver is no longer required on board, there will be new positions at the loading docks, in trailer yards and in ensuring safe operations.

Sahdev was recognized in September with the Mitacs Environmental Entrepreneur Award for his work with NuPort Robotics. The award acknowledges the work of researchers in turning their ideas into viable Canadian businesses.

“Not only will their inventions ultimately help Canada to recover from this crisis, but with continued investment in talent, research and development, they will ensure we keep our spot in the global innovation economy,” says Mitacs CEO and scientific director John Hepburn.

NuPort Robotics appears to be well on its way to achieving that goal. Since its launch, the company has grown from two to 10 people, and is on track to increase to 16 next year. As the technology gets closer to deployment NuPort will hire oversight officers, inspection officers and mechanics, among other positions. “We’re aiming to reverse the trend of ‘brain drain,’ or top talent leaving the country, by creating jobs for artificial intelligence professionals in Canada,” Sahdev says.

In addition to its initial pilot partner, the company is looking for other potential customers and transportation companies and is also seeking seed investments to boost its growth strategy. “We’re currently the only company in Canada working on autonomous, self-driving trucks for short distances,” Sahdev says. “We want to establish Canada as the leading country for autonomous vehicles in the world.”