A hobby with ROI – Nicolai Rassolov leads students to victory 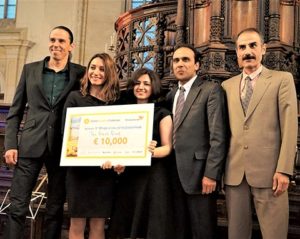 L-R: Nicolai Rassolov on stage with the 2018 winning team, Nasim Changizi, Nasim Darabi, Ahmad Kianimoghadam and Shahryar Ebrahimi. All are students in the McGill School of Continuing Studies’ Diploma in Supply Chain and Operations Management program.

By day he’s materials procurement manager at the Montreal-area production facility for Galderma Canada Inc, a skin-care products manufacturer under the Nestle Skin Health umbrella. But by night (and other times) Nicolai Rassolov
is a superhero to Montreal area supply chain students.

Rassolov doesn’t wear a cape or tights, instead wielding insights and analysis to help students succeed on the international stage in supply chain case study competitions. Since he began coaching students from HEC Montréal (the graduate business school of the Université de Montréal) in 2012 as a volunteer, Rassolov has mentored local teams to podium finishes in supply chain case study completions around the world every year since 2014.

A break from routine

Back in 2012 the day-to-day routine of work, home, sleep and work again was wearing Rassolov down. To spice things up he sought out the local chapter of APICS, the association for supply chain management, and joined the board. His mandate was to develop the student chapter, and as part of that, take a team to the Global Student Challenge case study competition.

As a graduate of HEC himself, it was easy to build connections with faculty and students, and in 2014 a team from HEC went to the APICS Canadian case study competition in Burlington, Ontario – and won. The team went on to place second in the global competition that year.

“From there on the cycle repeated itself,” Rassolov says.

Under his mentorship student teams won first place at the APICS Canadian Case Study Competition from 2014 to 2017. And in 2015 and 2016 his teams also went on to take the top two spots in the global competition. To top it off, his team placed first overall in the 2018 Student Challenge in Supply Chain and Supply Chain Finance, delivering the best results in their case study out of a field of 2,200 universities and 20,000 students from around the world.

Along the way, Rassolov was recruited to teach a graduate level continuing education supply chain project course at McGill University in Montreal. With that change, in 2015 he began coaching McGill students to case study victory.
What’s his secret? He teaches his McGill students using a practical case study approach that at first closely mimicked The Fresh Connection – the initial case study used for the competition.

“I thought, ‘how can supply chain management be taught using a similar approach to the case study challenge?’” Rassolov says.

“It helped me to build the course that provided in the theoretical knowledge and the practical application of that knowledge, directly in the classroom and simulation. And it helped students who had no experience in supply chain management to understand the concept and to understand how things work together.”

Nonetheless, Rassolov admits that he was a little bit surprised this year to bring home the global first prize. “[It was] quite an interesting success; a little bit unexpected,” he says. “But the students worked very hard. I helped them in my capacity and it worked, and it worked well. It tells me I’m doing something right.”

While he’s paid to teach the course, the coaching he does is all on a volunteer basis. He finds it hard to quantify the amount of time he spends on it, preferring instead to focus on the benefits to the students and the feedback it gives him to continuously improve the McGill course offering.

“This is just a hobby for now. I am doing it for fun; I’m doing it for something that creates a positive energy for me and for the students. If at some point it becomes something else I will be more than happy to adjust, but so far I’m happy with what I do and where I am.”

It may be “just a hobby”, but it’s one that Rassolov is passionate about, and his comment about doing “something” right belies a much deeper skill and ability than he is comfortable taking credit for. In fact, it was almost as an afterthought that he shared another “small personal achievement” – this year he won the global teachers’ challenge organized alongside the student competition. Playing the same case study as the students, Rassolov on his own (thanks to a late entry) beat all the other international teams of four professors to come up with the highest ROI in the case.

Rassolov clearly leads by example and his students in the McGill program should be very happy their mentor is so good at his hobby!