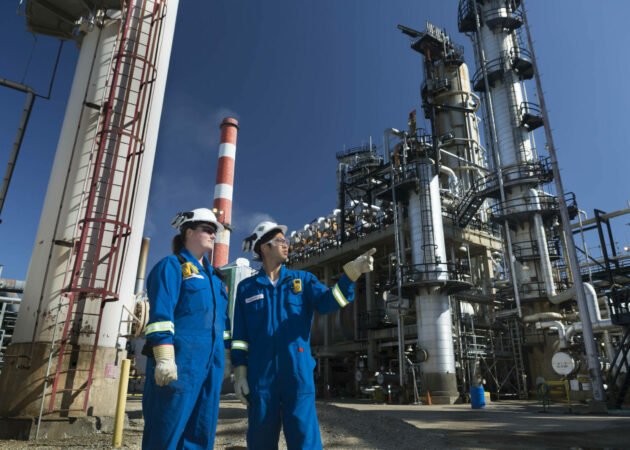 Calgary-based Imperial – a subsidiary of ExxonMobil and Canada’s largest petroleum refiner – said Wednesday its proposed project would be the largest facility of its kind in Canada, capable of producing more than a billion litres per year of biofuel annually.

That works out to the equivalent of about three million tonnes per year of emissions reductions from the Canadian transportation sector when compared with traditional petroleum-based diesel, said Jon Wetmore, Imperial’s vice-president of downstream.

“For the most part I think all of our customer base is really interested and keen on this,” Wetmore said. “The rail companies, CN Rail and CP Rail, have probably been the most vocal looking for a renewable fuel option for their locomotives.”

Renewable diesel fuel – sometimes called green diesel – is a biofuel that can be produced from a range of sustainable feedstocks including wood, crops and vegetable oils, and even sawdust.

Because it is chemically the same as petroleum diesel, renewable diesel can be used in regular diesel engines. That makes it appealing for companies racing to get in line with Canada’s new Clean Fuel Standard, which takes effect next year. The legislation will require liquid fuel suppliers to decrease the carbon intensity of their products by 13 percent by 2030.

“We’re not alone in this. Everybody’s looking at renewable diesel as being an advantaged fuel under the Canadian clean fuels regulation coming forward, and we certainly see it the same way,” Wetmore said.

Imperial’s proposed project will use “blue” hydrogen (a term used to describe hydrogen produced from natural gas with carbon capture and storage) to process locally grown crops such as canola and soybeans into the renewable diesel.

The company didn’t disclose a price tag for the proposed project, saying it intends to make a final investment decision next year. Production could start in 2024.

Wetmore said moving ahead with the complex will depend on market conditions as well as securing necessary government approvals and support. He said Imperial is in partnership discussions with the governments of Alberta as well as with B.C., which has its own provincial renewable and low carbon fuel requirements.

While most of North America’s major renewable diesel complexes are located in the United States, plans are also in the works to build one at Regina. That project, proposed by Federated Co-operatives Ltd., would be built at the company’s existing Co-op refinery site and has a 2025 production target. It would be similar in size to the one proposed by Imperial.