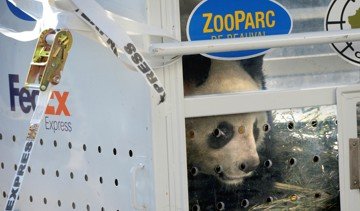 Their 5,000 mile, 11.5 hour journey began in Chengdu, China at theChengdu Research Base of Giant Panda Breeding and they traveled in special enclosures custom built by FedEx Express. The Pandas arrived at Charles de Gaulle Airport today at 12pm and will be the first Giant Pandas to reside in the France for more than 10 years. They were accompanied by a Chinese veterinarian and animal handler as well as the managing director from ZooParc de Beauval to look after their needs throughout the journey.

This photo: Huan Huan in her Panda enclosure