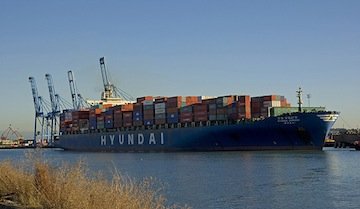 “AAPA is pleased to see that, in this era of fiscal restraint and belt-tightening, that a number of the priorities of America’s ports were important enough to lawmakers that they included them throughout this government-wide spending bill,” said Kurt Nagle, AAPA president and CEO.  “The funding provided to port-related infrastructure programs is recognition that lawmakers appreciate that seaports, the connections with them and the trade flowing through them, are vital to creating and sustaining jobs, economic growth and enhancing U.S. international competitiveness.”

A section of the appropriations bill important to America’s freight movement is $600 million in funding for TIGER discretionary grants, representing a 20 percent increase over last year’s $500 million appropriation. Since its inception in 2008 as part of the American Reinvestment and Recovery Act, AAPA has advocated that port-related infrastructure projects receive at least 25 percent of the grant funds.  Port-related projects received about 22 percent of the total $474 million in grants from the fifth round of the program in 2013.

For the Corps of Engineers’ Civil Works programs, the bill provides a total of $5.5 billion overall, compared to the Administration’s fiscal 2014 budget request of $4.8 billion. Of the total appropriated in this bill, an important milestone was reached with a funding level of $1 billion dedicated to navigation channel dredging operations and maintenance.  This compares to $890 million in the Administration fiscal 2014 budget request.

“While AAPA continues to advocate for full utilization of Harbor Maintenance Tax collections—which last year netted about $1.8 billion in revenue—as well as more equity for donors, the increased funding in this bill is an important step towards full use of those revenues, particularly in these constrained fiscal times,”  said Nagle. “Maintaining our federal navigation channels to their authorized and required dimensions helps make U.S. exports more internationally competitive and is critical for safe access in and out of America’s seaports,” he said.

As part of the Corps’ Civil Works appropriation, Congress also approved initiating three new starts for deep-draft navigation studies and up to two new starts on construction projects.  These are the first new starts since 2010.  The final decision as to which projects will be funded will be made by the Corps in its annual work plan.

With regard to seaport security, Nagle said that AAPA is appreciative of the portion of the appropriations bill that calls for $100 million from FEMA State and Local Programs to be dedicated to the Port Security Grant Program. Furthermore, the bill rejects the Administration’s proposal to bundle all State and Local Programs security grants into one pot and move them to the states to determine allocations, a move AAPA strongly opposed, believing that funding decisions should be maintained at the federal level to protect international transportation gateways.  AAPA continues to advocate for a separate port security funding program to aid ports in boosting their security infrastructure, technology and personnel programs, and to ensure that terrorist threats don’t become terrorist realities.

In the environmental arena, funding for the Environmental Protection Agency’s DERA grants—which has been highly successful in helping ports reduce emissions from older diesel engines—remained level at $20 million, despite an overall decrease in the EPA’s appropriation compared to fiscal 2013.

NOAA’s National Ocean Service Operations, Research and Facilities appropriation, which funds several navigation-related subprograms important to shipping and ports, was funded at $471.9 million, an increase of roughly 5 percent over the fiscal 2013 appropriation, but about 5 percent less than what was in the Administration’s budget request.  NOAA states that its overall appropriation is sufficient to maintain the agency’s core suite of products and services to the maritime community.  Of particular interest to ports is NOAA’s Physical Oceanographic Real-Time System (PORTS), which provides environmental observations, forecasts and other data to significantly improve the safety and efficiency of maritime commerce. While it received sufficient funding to maintain its share of program costs, its appropriation provides no additional funding for fiscal 2014 operations and maintenance, which continues to be paid by individual ports.

“As Congress and the Administration grapple with the multiple goals of reducing the nation’s deficit while growing jobs and the economy, federal investments in ports and connecting infrastructure will continue to be an essential, effective utilization of limited resources paying dividends through increased trade, jobs and tax revenues,” said Nagle.

AAPA today represents more than 130 of the leading seaport authorities in the United States, Canada, Latin America and the Caribbean