Power Swap System has a single or dual battery configuration 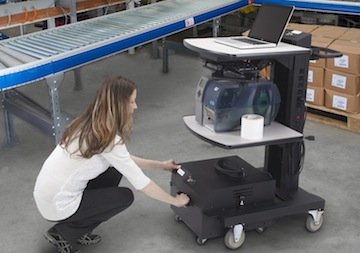 The Power Swap system can be fitted with either one or two batteries. (Photo: Newcastle)

The power units, which are both UL- and CSA-approved, can be purchased with a single battery (100 ampere-hour) or dual batteries (200 ampere-hours). They are housed in fully ventilated steel cabinets measuring 41cm by 41cm by 30cm (16in by 16in by 12in) with built-in handles and cord holders. They rest on steel casters.

The Power Swap System is designed to work in conjunction with the company’s NB Series Mobile Powered Workstations, which can power up to four devices such as computers, printers, scales, testers, barcode scanners simultaneously. The Power Swap connectors mate with the ports located on the workstations. The NB series can be configured to support a wide variety of equipment as it offers adjustable shelves which can hold 35kg (75lbs) each.

According to the company, when the battery is depleted, it can be swapped for a fully charged one in approximately 30 seconds. It can be recharged by plugging it into a standard wall outlet.

A unit with a depleted battery can be swapped with a fully charged one in only 30 seconds. The spent unit is then recharged at a standard wall outlet.