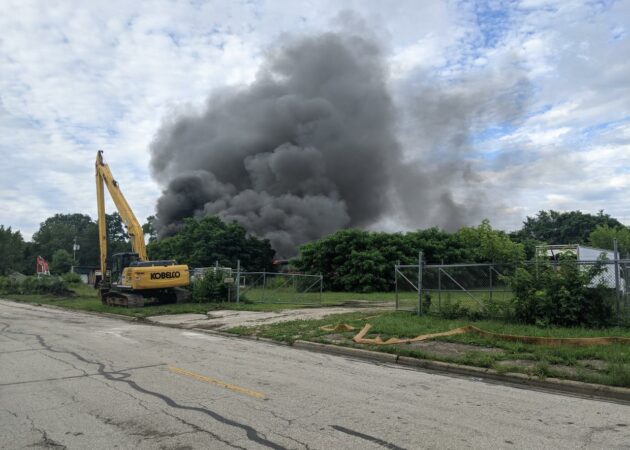 On June 29, 2021, an old paper mill storing 184,000 lbs of lithium batteries caught fire. The Grundy County Emergency Management Agency ordered a 1/2 mile evacuation of nearby residents due to the presence of hazardous substances within the building. (EPA image)

The U.S. Environmental Protection Agency has reached an agreement with a northern Illinois battery company to clean up a warehouse where a June fire led to the evacuation of thousands of nearby residents, the agency said Thursday.

Superior Battery in Morris will perform the work under EPA supervision, the agency said. Work will begin in October.

The warehouse contains 100 tons of various types of batteries, including some containing lithium, as well as solar panels, waste electronics and other materials. Lithium batteries are a safety and fire hazard because they contain a flammable electrolyte and might become pressurized when damaged, causing them to rupture, the EPA said. Rupture of the batteries might cause them to overheat and catch fire or explode.

The agreement requires Superior Battery to clean up hazardous and potentially hazardous substances from the burned materials at its warehouse. The company also must perform sampling and analysis of waste, soil, burned material, asbestos, storm water, and air, the EPA said. All waste will be shipped off-site for disposal.

Some 3,000 to 4,000 nearby residents were evacuated from their homes for three days because of the fire.

The company’s owner, Jin Zheng, apologized for the disruption the fire had on the lives of those who live and work near the warehouse.