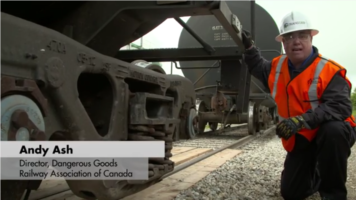 The TRANSCAER video is available at: https://youtu.be/0v9k2ko_tqw

Led by Chemistry Industry Association of Canada and the Railway Association of Canada, TRANSCAER brings together chemical manufacturers, oil producers, railways and trucking and distribution companies, to inform communities about the products being transported through their area, and provide free training to emergency responders on how to handle a transportation incident involving dangerous goods.

Andy Ash, Director of Dangerous Goods for the Railway Association of Canada, appears in the new TRANSCAER video along with members of the Woolwich Fire Department, Waterloo Regional Police, and employees of Chemtura Canada.

By providing free training and resources on emergency preparedness through TRANSCAER, and innovative tools such as the AskRail mobile application, Canada’s railways are helping to keep communities and first responders safe.

For more information about TRANSCAER, or to set up an event in your community, visit transcaer.ca.