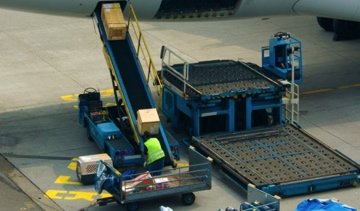 Montreal: About 400 ramp and cargo service employees are on strike after failed contract negotiations with ground service provider Handlex.

Workers at Handlex, a subsidiary of Air Transat, are responsible for loading and unloading baggage for several airline companies, including Air Transat, Air France, British Airways and Swissair.

Handlex workers rejected management’s final offer at the company’s head office in Toronto, said Stephane Lacroix, director of communications for Teamsters Canada. The main points of contention are salaries, as well as night and split shift bonuses, he noted.

“We expect the employer to offer more than (an increase of) two percent per year for three years,” Lacroix said.

The company decided lock out the workers so as to put in place a contingency plan involving non-union employees and managers to continue operations, said company spokesman Pierre Tessier.

“It enables us to better control the service to our clients,” he said. “We have a better handle on the situation that way.”

Operations and services to all airlines served by Handlex have remained uninterrupted, and all flights left on time February 15 and 16, he noted.

While both sides said they are open to talks, no meetings are scheduled between the two parties.