August 7, 2013
by MM&D staff with files from the Canadian Press 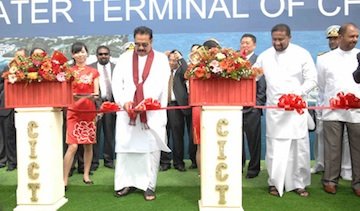 August 7, 2013
by MM&D staff with files from the Canadian Press

The expansion is the first part of a three-stage project planned by the SLPA. Once all three stages are complete, the port (which can currently handle over four million TEUs), will have increased its capacity by an additional 7.2 million TEUs.

This phase saw the deepening of the harbour from 18m (59ft) to 23m (75ft), the construction of a 6.8km (4.2mi) breakwater and 285 hectares of harbour basin, plus the addition of 2.4 million TEUs of capacity. With the changes, the port will now be able to accommodate vessels carrying 18,000 TEUs.

The next two phases will involve building two more independent dedicated container terminals. The construction schedule calls for all work to be completed by April 2014.

The expansion was funded with $300 million loaned by the Asian Development Bank and $100 million provided by two government agencies.