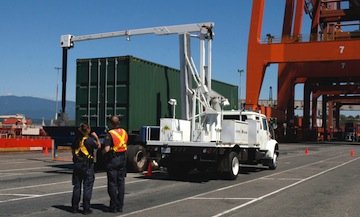 Along with changes to sufferance warehousing rules, CBSA says it is training officers to better evaluate high-risk shipments. (Photo: CBSA)

OTTAWA, Ontario—Over recent months there has been a wave of programs—including Integrated Cargo Security, eManifest, Low Value Shipment (LVS) Threshold—designed to streamline and improve the way goods flow across Canadian borders. The Canada Border Services Agency (CBSA) has been given primary responsibility to manage many of the initiatives on behalf of the federal government.

In February, CBSA held a meeting of its Border Commercial Consultative Committee (BCCC) to review many of the new programs. Minutes of the meeting (which have been made public this week) reveal that work is far from completed on the new border policies. In fact, a number of new programs are in the works. Chief among them is the Cargo Control and Sufferance Warehouse Modernization (CCSWM) initiative.

According to the report, the goal of the initiative is to “eliminate the concept of sufferance warehouses, automate all functions, and reduce the types of warehouses from 14 to two.”

At this point, the details of the plan have not been finalized, but a Customs notice, published by the CBSA, describes in a bit more detail what the agency expects the new approach to be. Once implemented, CCSWM will allow “carriers who accept the liability for the goods…to move unreleased, secured cargo in-land directly to their own or a shared CBSA-registered warehouse.”

The notice also explains that “all imported shipments will continue to be risk-assessed by the CBSA at the First Point of Arrival (FPOA) for reasons of health, safety and security. In-land examinations will be conducted at designated locations instead of at each warehouse facility.”

CBSA says it is considering five key changes to the current sufferance warehouse program. They are:

Besides CCSWM news, the minutes revealed a number of other actions, promises and initiatives the CBSA has committed to addressing. Some of these include:

It also committed to clarifying the issue of fines—known as administrative monetary penalties (AMPs)—imposed on trucking companies that don’t provide CBSA with documentation under the Advance Commercial Information (ACI) program. Three action items in the minutes indicate the CBSA promises to: