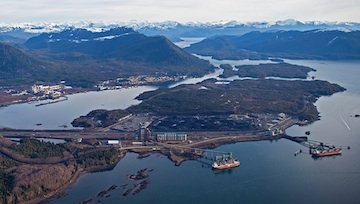 Plans call for the building of five parallel rail tracks, a two-lane roadway, and a port-owned power distribution centre, all to be located in an eight-kilometre corridor.

The infrastructure development is being viewed as a catalyst to spur the building of new terminals on Ridley Island to handle 13 million tonnes of potash for Saskatchewan-based Canpotex and liquefied natural gas (LNG) for the UK-based BG Group. The Port Authority’s Gateway 20/20 Plan projects an annual throughput capacity of 100 million tonnes of cargo as proposed terminal developments are completed.

Phase one of the construction process is scheduled to be completed by December 2014. The cost of the road, rail and utility corridor is $90 million, with funding responsibility split between the public and private sectors. The federal government and BC provincial governments are each contributing $15 million, while $30 million is being committed by both CN and the Port Authority.

Those figures, however, pale in comparison to the projected costs to build the terminals themselves. Estimates for the capital costs related to the construction of the terminals range into the billions of dollars.

“This project will connect Canada’s proven capacity for resource production to growing markets in the Asia-Pacific region and is the largest in Prince Rupert since construction of the Fairview Container Terminal,” said Bud Smith, chair of the board of the Prince Rupert Port Authority.

“This project in Prince Rupert will give us more capacity to serve booming markets in Asia. By working with our government and private sector partners we can continue to lead the competitive race for Asia Pacific trade as the preferred Gateway to North America,” said British Columbia’s transportation and infrastructure minister Mary Polak.

CN general manager Doug Ryhorchuk, explained why the railway is involved in the project.

“The growing awareness of Prince Rupert as a North American gateway to Asia has created global interest in the port and the northwest region for investment and commerce. CN’s investment in the Road, Rail and Utility Corridor will strategically add export capacity and help strengthen the infrastructure to get Canadian goods to market”