March 23, 2021
by Inside Logistics Online Staff

March 23, 2021
by Inside Logistics Online Staff 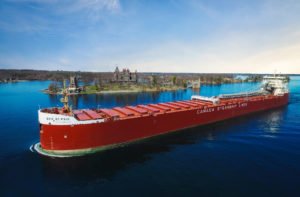 The Baie St. Paul passing Boldt Castle in the 1,000 Islands section of the St. Lawrence River.

The CSL Group’s Baie St. Paul, a Trillium‑class Laker, was the first ship through the St. Lambert Lock in Montreal in a virtual opening ceremony attended by a number of dignitaries, including the Omar Alghabra, minister of transport, and the Pete Buttigieg, U.S. Secretary of Transportation.

“The St. Lawrence Seaway has been a cornerstone of Canada’s economic success for more than 60 years, through the creation of thousands of…jobs, and the generation of more than $9 billion in Canadian economic activity,” Alghabra said. “

About 38 million tonnes of cargo transited the St. Lawrence Seaway in 2020, which closely matched 2019 results. The stringent protocols put in place by the Seaway and by carriers early in the pandemic resulted in no interruption in service due to COVID-19. The protocols will remain in place until the pandemic is contained.

“A ship transiting the Seaway’s 15 locks from Montreal to Lake Erie crosses the international border 27 times, and the U.S. Department of Transportation and Transport Canada work closely together to ensure that this transit experience is as safe and seamless as possible.”

On the heels of last year’s record harvests, grain shipments are expected to be strong early in the season. Iron ore and steel will be shipped via the Seaway to factories in Canada and abroad, and massive wind farm equipment will continue to be transported via the Seaway.

The introduction of hands‑free mooring systems and the remote operation of locks are examples of the Seaway’s technological innovations aimed at increasing the competitiveness of the waterway.

“As a major partner in the maritime industry, the Corporation is always seeking ways to innovate and reduce the environmental impact of maritime transport, to offer improved client experience and to broaden its competitive advantage,” said Bowles.

“For example, the automatic identification system that tracks ships via satellite and makes it possible to manage operations remotely, the draught information system, which allows ships to carry up to 400 additional tonnes per trip and the hands‑free mooring system.”