Fees proposed to cover cargo inspections at US border crossings 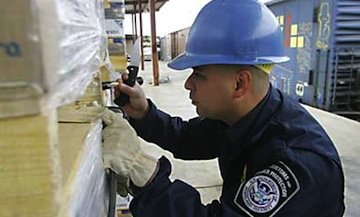 WASHINGTON, DC—Canadian manufacturers fear even more fees may be looming at the Canada-US border as the US Department of Agriculture (USDA) recommends revenue-generating measures that could result in higher costs.

In a presentation to stakeholders in the US capital this week, the department suggested new border fees because some federal agencies, including US Customs and Border Protection (CBP), are currently providing free services at America’s borders.

CBP works in collaboration with the USDA’s agriculture quarantine and inspection program, which provides checks of imported agricultural goods and commercial aircraft, rail cars, ships and even passenger baggage to prevent harmful pests, diseases and materials from entering the US.

“Approximately $191 million in CBP costs are associated with services for which no fee is currently charged,” the department’s presentation stated.

The spectre of increased costs at the border comes as the much-ballyhooed Canada-US Beyond the Border initiatives are supposed to be resulting in precisely the opposite state of affairs.

Ed Fast, Canada’s international trade minister, called the prospect of new border fees from the USDA “another protectionist measure”—and one his government would vigorously oppose.

“We don’t know exactly what it’s going to look like, but certainly we’ll be contacting my counterpart in the United States to press upon them that this is not helpful at all,” Fast told reporters on Parliament Hill.

“If they want to drive economic growth in the US—we want to do so in Canada—it’s not going to happen by raising new barriers at the border. It’s going to be by opening up trade, freeing up trade, so that we can drive prosperity in both of our countries.”

It’s the second time in recent weeks that the spectre of border fees has reared its ugly head. The 2014 budget from the Department of Homeland Security also proposes a border crossing fee for every vehicle or pedestrian entering the United States.

Janet Napolitano, homeland security secretary, recently noted that the processing fees of upwards of 350 million travellers a year have not been adjusted, in many cases, for more than a decade.

The Canadian government vowed too to lobby against that fee, although a New York congressman has said it’s unlikely the border crossing levy will ever come to pass given opposition to the idea by both Republicans and Democrats in Congress.

New USDA fees would not, however, require a congressional green light, says Birgit Matthiesen, the DC-based point person for the Canadian Manufacturers and Exporters organization.

“The border crossing fee would need authority from Congress because Homeland Security is actually proposing lifting exemptions that currently cover passengers and pedestrations,” she said.

“But there is no talk of lifting exemptions with the USDA proposals, according to the initial information we’re getting.”

That means they’d be easier to establish.

Trade officials on both sides of the border point to so-called sequestration, massive cuts to a host of American federal agencies, as the sudden villain in Canada-US relations.

The cuts, aimed at slashing the mammoth $16.8 trillion US national debt, have left federal departments strapped for cash and resources and looking for ways to raise revenues.

“In both instances, it’s clear that the driving force is sequestration and that it will continue to have an impact on border agency resources,” Matthiesen said.

“And neither fee proposal at this point makes any mention of assessing fees based on risk or distinctions for our best corporate citizens.”

In an e-mail to members, the CME raised the alarm about the notion of USDA fee increases, which would be charged to carriers—trucking and shipping companies, airlines and railways.

“Given the volume, nature and immediacy of our cross-border trade, this new fee analysis is troubling,” the e-mail read.

It pointed out that the USDA recommendations made no distinction for country of origin, meaning Canada once again could get lumped in with myriad other nations despite the integration of the US and Canadian economies.

The next step will involve the USDA submitting its proposals to the Office of Management and Budget, and then to move forward with formal recommendations in the weeks to come.