CN and CP rail lines targetted, along with bridges and highways

January 16, 2013
by MM&D staff with files from the Canadian Press 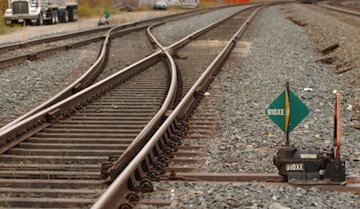 January 16, 2013
by MM&D staff with files from the Canadian Press

WINDSOR, Ontario—Uncertainty is the word of the day when it comes to Canada’s transportation network, as First Nations groups have scheduled marches, protests and blockades across the country.

As reported earlier this week, the Ambassador Bridge, which links Windsor, Ontario with Detroit Michigan, is one of the planned protest locations.

While Windsor Police originally said Idle No More, the First Nations protest movement, is organizing force behind the protest, a statement issued by one of the leaders of the action said that’s not the case.

According to Delaware Nation Chief Greg Peters, today’s event will be a peaceful march, but it won’t be part of the Idle No More protest. He says the protesters just want to to show support for First Nation leadership. He added that the demonstration is aimed at showing Canadians that First Nations are peaceful and that all they want is their fair share.

Peters expects 500 people to participate in the March, which will move along Huron Church Road toward the bridge. They will hold a round dance and make speeches at the intersection of Huron Church and College Ave. Peters says the march might slow traffic and cause a little inconvenience for an hour but he says the group doesn’t plan any blockades.

Just as Peters says the Windsor protest isn’t actually part of Idle No More, blockades expected to occur on as-yet-unnamed CN and CP rail lines in Manitoba are also not part of the movement, according to the organizer.

APTN National News is reporting that former Roseau River chief Terrance Nelson, has said a “small group” of people will launch rail blockades today, but that the group  is working independently from the main protest movement.

The news organization quotes Nelson as saying “This isn’t a round dance, this will have consequences,” adding “It will block everything going east and west.”

APTN also reports “Idle No More’s founders and organizers have distanced themselves from plans to launch blockades in several provinces on Wednesday.”

In addition to the protests in Windsor and Manitoba, there are actions scheduled for across the country, including:

CBC.ca also has a partial list of scheduled protests, including marches in downtown Regina, Saskatchewan and Fredericton, New Brunswick, and a blockade of the QE II highway in Edmonton, Alberta.