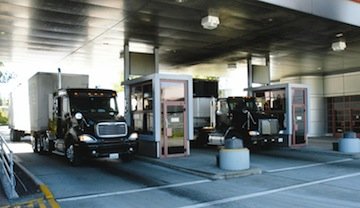 While many of the upgrades should improve the flow of passenger traffic, some enhancements are designed with commercial crossings in mind. In particular, the Lansdowne Port of Entry at the Thousand Islands Bridge in Ontario (40km east of Kingston), should see some improvements to its cross-border cargo flow once the upgrades are completed. A new Canada Border Services Agency inspection plaza is being built, roadways are being improved, and five extra primary inspection lanes are being added, with two of those lanes being dedicated to commercial traffic. The total cost for the improvements is estimated to be $60 million.

The funds for the upgrade are part of the $2.1 billion Gateways and Border Crossings Fund (GBCF). The government has earmarked this money for infrastructure projects that “increase the productivity and efficiency of strategic transportation assets of national significance, such as bridges, roads and ports, which are part of international gateways, strategic trade corridors and key land border crossings.”

Construction at the Lansdowne Crossing is scheduled to start in 2015. It should be completed in two years.

In 2012 over $14 billion in two-way trade flowed across the Lansdowne Crossing.

The other border improvement projects announced recently are: