Small county threatens to take over project from state-level partners 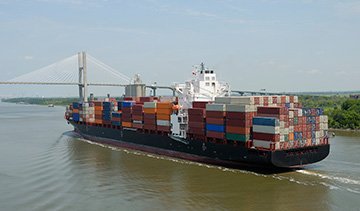 A containership sails the Savannah River, which is supposed to be home to a new container port. (Photo: Thinkstock)

SAVANNAH, Georgia—After more than five years of watching Georgia and South Carolina try to work together on a new seaport for the Savannah River, officials in the county where the proposed US$3.3 billion cargo terminal would be built say they’re prepared to attempt a takeover of the project.

Jasper County, South Carolina, has been trying for more than two decades to put a shipping terminal on the river across from Savannah. Its efforts were opposed in court by both states—which share the river and operate competing ports in Savannah and Charleston—before their governors agreed in 2007 to take on Jasper County’s port dream as a joint project between the neighbouring states.

Years later the board overseeing the partnership, made up mostly of port leaders from each state, has bought land for the shipping terminal and spent millions of dollars on feasibility studies. But progress has been slow, and local officials say they’re fed up.

Members of the Jasper County Council left the board’s June meeting fuming at what they considered another pointless delay. Earlier this month, the council voted to deliver an ultimatum: If the joint port board doesn’t agree to start seeking construction permits for the project at its next meeting September 17, then Jasper County will demand control of the port project and the 1,500 acres of land purchased for it.

“The people at the Joint Project Office just keep putting it off and putting it off,'” said Henry Etheridge, chairman of the Jasper County Council. “Turn it over to us, and let us get a private concern in there to go forward.”

Jasper County ranks among South Carolina’s poorest, with a per capita income of US$17,162. Many of its 23,200 residents commute to jobs across the river in Georgia while the local economy gets by largely on travelers stopping for gas and fast food along the Interstate 95 highway. Local officials have long seen a port terminal as key to the county’s economic salvation.

Georgia and South Carolina have sought to control the project because they see an opportunity to expand their market share by attracting cargo that would otherwise go to competitors such as Norfolk, Virginia. The states also see potential to attract more trade with Asia that’s currently routed through the West Coast. They say Jasper County would be able to handle up to seven million containers of imports and exports each year, far more than now moves through Savannah and Charleston combined.

Consultants told the two-state port board last month that a new port in Jasper County would be profitable, operating an estimated US$1.2 billion in the black within 14 years of opening. They estimated that the terminal would take 13 years to build once the states begin applying for construction permits with the federal government. That hasn’t happened yet. South Carolina’s members of the joint board have insisted on another study, to determine whether the river needs alterations to make room for ships bound for both Jasper County and the Port of Savannah just 11km (seven miles) upriver. It should be finished around the end of the year.

Both the joint port board’s chair, David Posek of South Carolina, and vice-chair, Jim Balloun of Georgia, said a vote on construction permits probably won’t happen in September. And both said they’re committed to building a shipping terminal in Jasper County that would be capable of handling more cargo containers than are currently shipped through Savannah and Charleston combined.

The idea is for the Jasper County terminal to move imports and exports that Savannah and Charleston don’t have room to handle as they approach full capacity. If the Jasper port is built too soon, before there’s much demand for it, the terminal could flop, Posek said.

“Both states believe fully we’re going to run out of capacity and there’s no place to build a terminal of this size other than Jasper,” Posek said. “I see there’s going to be an economic boom in Jasper County when this terminal is completed. But there could also be an economic bust if this is developed before it’s needed.”

Balloun said Georgia is ready to start seeking permits. That’s expected to cost each state US$1 million per year for a decade. But he said Georgia’s members of the joint board are willing to give South Carolina more time to feel confident in the investment. He also said he doubts either state—much less a local government—could tackle such a large project alone.

Jasper County could perhaps build a port on a smaller scale, Balloun said, “but there have been ports in both states that have closed because they didn’t have enough business. The one we’re talking about is going to have a lot of business.”

County officials say Jasper County would have legal standing to demand a takeover, citing a law passed by South Carolina legislators in 2009 that says if the shared port fails to be developed “in an expeditious manner,” one solution would be to terminate the partnership between the two states and “transfer to Jasper County the assets and right to develop the port.”

The law leaves that decision up to the South Carolina Ports Authority, which along with Posek also has its board chairman and chief executive on the board overseeing the Jasper County project.

Tom Johnson, the Jasper County councilman who drafted the resolution demanding progress on the port, said he’s not sure what will happen if the two-state board fails to meet the county’s ultimatum.

“I cannot envision them turning the port over to us, nor can I envision them building the port,” said Johnson, who didn’t rule out another court fight over control of the project. “To start with, they’ll laugh at us, and then when we get a little closer to success, they’ll curse at us.”