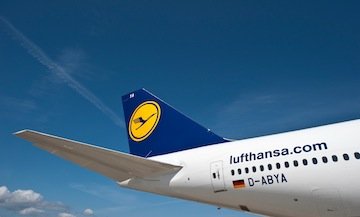 Only a handful of Lufthansa's 1,700 scheduled flights will fly today. (Photo: Lufthansa)

BERLIN, Germany—Ground staff at Lufthansa, Germany’s biggest airline, walked off the job Monday on a one-day strike that prompted the company to cancel most of the day’s scheduled flights and left it complaining of “excessive” union tactics.

The strike by airline technicians and service personnel across Germany started in the early hours. Lufthansa moved in advance to head off chaos, announcing on Saturday that it was cancelling almost all scheduled short-haul flights and the majority of long-haul services.

In all, the airline planned to operate only 32 of more than 1,700 scheduled flights.

The ver.di union announced the “warning strike”—a tactic commonly used to raise pressure in wage talks —on Friday. Lufthansa last week rejected its demand for wage increases of 5.2 percent over the next year and job guarantees, countering with a complex offer that foresees smaller raises over a 29-month period. Ver.di, which is negotiating for some 33,000 workers, argued that the offer would mean wages falling in real terms.

“We demand that we definitely get a pay rise … and we are not willing to accept increased working hours,” said Brigitte Scheffler, a Lufthansa employee at Berlin’s Tegel airport.

Ver.di official Gerold Schaub told n-tv television that the union had “no other possibility” to exert pressure on Lufthansa management, and noted that it was the airline itself that decided to scrap more than 1,600 flights.

Lufthansa is trying to cut costs to cope with high fuel prices as well as vigorous competition from European discount carriers and the big Gulf airlines such as Emirates, Qatar Airways and Etihad Airways. Last year, the airline and a union representing cabin crews called in an arbitrator to settle a pay dispute after a series of short-term stoppages.

“This time it is a strike … with a massive impact, completely excessive, that has only one aim—to position itself as a union at Lufthansa against many other unions and groups,” Lufthansa’s chief personnel officer, Stefan Lauer, told ARD television. He put the number of passengers affected at 150,000.

Lauer complained that “the transport sector has mutated into a strike sector” and said that “we as Lufthansa now have to suffer strikes every three months,” often by unions representing non-Lufthansa workers such as air traffic controllers and airport security staff.

The German national employers’ association has called for government action to rein in the problem of companies facing demands from competing unions but, while Chancellor Angela Merkel has expressed sympathy for their concern, little has happened.