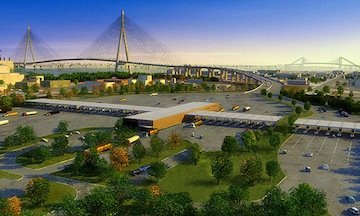 DETROIT, Michigan—With a signature, US president Barack Obama has cleared the way for construction of a new bridge joining Detroit, Michigan and Windsor, Ontario.

Once the presidential permit was granted (a requirement for all US border-crossing projects with other countries) Michigan governor Rick Snyder held a press conference at James Group International, an inventory consolidation and logistics service provider located in Detroit. There, with an assortment of US and Canadian officials in attendance—including Canadian labour minister Lisa Raitt, and Essex MP Jeff Watson—Snyder announced that the long delayed project, currently known as the Detroit River International Crossing (DRIC)/New International Trade Crossing (NITC,) was ready to proceed.

The next steps to creating a new span involve acquiring property in Michigan (either by purchasing it or appropriating it) and relocating utilities. Then, further work must be done on the design concept. Initial plans call for the structure to have six lanes, state-of-the-art inspection plazas, and easy access to the Interstate 75 highway via an interchange.

Raitt welcomed the announcement and issued a statement on behalf of the Canadian government.

“Canada and the United States are each others most important trading partners. The presidential permit represents an important step towards a new bridge which will be needed for growing trade and traffic at the busiest Canada-US commercial border crossing with over 8,000 trucks crossing each day.”

Comments also came from businesses and organizations that rely depend on border crossings for their businesses.

Chrysler Group issued a statement saying it “appreciates the strong leadership that US and Canadian government officials have demonstrated in the effort to secure a new international crossing…Ensuring a smooth crossing for both companies and people is essential to our just-in-time manufacturing process.”

“With the approval of the Presidential Permit, the new international trade crossing (NITC) is on the road to completion and needs to proceed without delay. A state-of-the-art, highly efficient, effective and reliable new crossing with improved flow of goods is essential to maintaining our competitive place in global markets,” said Mark Nantais, president of the CVMA.

While the Ontario and the federal governments have long been in favour of creating a new crossing (the federal government included the regulatory framework for it in the 2012 budget, and offered to finance the entire cost of the billion-dollar bridge), support on the American side of the border had been harder to come by.

In particular, Manuel “Matty” Moroun, who controls the Detroit International Bridge Co, the company that owns and operates the Ambassador Bridge, has offered fierce resistance to the project. He has done everything from running advertising campaigns against the bridge to launching lawsuits to prevent its construction.