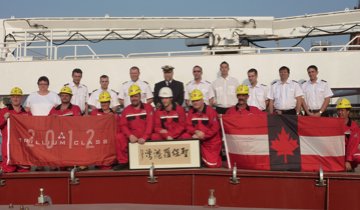 JIANGYIN, China, and VANCOUVER, British Columbia—It was a momentous day for shipping in Canada, as two companies celebrated major events.

In China, the Baie St Paul, the newest addition to Canada Steamship Lines’ (CSL) fleet departed from the Chengxi shipyard on its way to Montreal, Quebec. The ship is a trillium class, gravity-fed self-unloader, and is the first of four such ships (and two bulk carriers) to be delivered to CSL.

For its maiden voyage, the Baie St Paul is under the command of captain Mike Despotovich and chief engineer Dominique Tanguay. The trip is expected to take 50 to 60 days, and once in Montreal, special reinforcing structures, which were fitted to the ship to make the vessel, which was designed for work on the Great Lakes, strong enough to withstand an ocean voyage.

“Every first voyage of a new ship is an exciting event, but with the Baie St. Paul, the occasion is truly historic as CSL prepares to welcome the most modern vessel in the Great Lakes,” said Louis Martel, president of Canada Steamship Lines.

“We are very proud of this achievement and are grateful to the design and newbuild teams for the hard work and dedication they have devoted to this challenging project and continue to apply to every new trillium class vessel.”

In addition to the Baie St Paul, CSL also saw the launch of the Rt Hon Paul Martin, a trillium class, self-unloading Panamax vessel, which is the first of three similar ships destined for company’s international fleet.

After reaching Port McNeill, British Columbia, the Rt Hon Paul Martin will be deployed for service immediately, loading her first aggregate cargo for discharge in the San Francisco area. The ship is under the command of captain Vladyslav Tarasov and chief engineer Volodymyr Romanchenko for the voyage, and left from the same Chenxgi shipyard.

Grieg Star Shipping, also marked the start of a new era, as it held a naming ceremony for its newest breakbulk vessel, the Star Lima at Port Metro Vancouver.

The Star Lima is an open hatch vessels and is  fitted with four cranes, each capable of lifting 75 tonnes.

Based in Bergen, Norway, Grieg Star ships bulk metal and forest products through the Vancouver Gateway. In total is is scheduled to take delivery of 12 new ships by 2014. “Grieg Star is proud and excited to be here with our partners in industry to celebrate the naming of this vessel. The Star Lima is the first ship of 10 forming part of the largest new ship building program in the history of the Grieg Group,” said president and CEO of Grieg Star Shipping, Tom Rasmussen.

“After more than 40 years of servicing this coast, Grieg Star is growing to better serve our partners to gain access to the markets they require. We continue to demonstrate our commitment to providing competitive break bulk services to Western Canada.”