No start date yet for $4 billion project 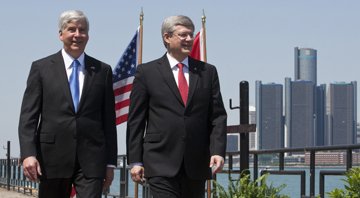 Harper’s comments came as he announced an agreement to construct a $1-billion link between Windsor, Ontario, and Detroit, Michigan.

“This is the most important piece of national and international infrastructure that this government will complete while I am prime minister,” he said.

Under terms of an agreement in principle with Michigan, Canada is financing the construction, and will recover the state’s share of the cost through tolls on the American side of the Detroit River.

The addition of custom plazas and highways—coupled with the costs of land expropriation—will see the total bill swell to $3.5 to $4 billion.

The work is also expected to create thousands of jobs on both sides of the border. It will also ensure sales for North American steel companies and other manufacturers—at least for the bridge itself.

“We are particularly pleased that the project will require that all steel and other construction materials must be of either US or Canadian origin, a provision that will ensure the bridge is constructed from quality materials while supporting high-value US and Canadian jobs. The New International Trade Crossing will greatly enhance industry competitiveness and facilitate intra-NAFTA trade,” said American Iron and Steel Institute (AISI) president and CEO Thomas Gibson.

“Now we need Ottawa and Ontario to proudly say they are standing up for Canada. Now that there’s a deal to build the bridge, we call on Stephen Harper and Dalton McGuinty to clearly say the Canadian-side infrastructure will be built with Canadian jobs and materials,” said Ken Neumann, United Steelworkers national director

The new span will be a few kilometres south of the existing Ambassador Bridge, which has become a serious bottleneck for trucks moving between the two countries.

Canada, the US, auto makers and other industries have argued for years that another crossing is desperately needed to end truck gridlock and provide an alternative if the existing bridge is shut down in the event of a terrorist attack.

Harper was joined for the announcement, ahead of a formal signing ceremony Friday in Detroit, by Michigan Governor Rick Snyder, who said his state simply didn’t have the resources to proceed without Canada’s help.

Snyder said his government is learning from Canada’s example on how to pull off this kind of public-private partnership.

“We actually have embraced a number of good thoughts and ideas that came from the Canadians on how they’re doing projects in this country,” he said.

Later in Detroit, two groups of demonstrators—for and against the project—shouted each other down across from where the signing ceremony was taking place.

The project has faced stiff resistance from Manuel (Matty) Moroun, the billionaire owner of the Ambassador Bridge.

Moroun has publicly decried the new project as an unnecessary boondoggle and some reports suggest he would launch a lawsuit in an effort to block its construction.

Harper said the Michigan and Canadian governments anticipate some fights but the need for the link is overwhelming.

“We should make no mistakes,” he said, “Whatever battles lie ahead this bridge is going to be done.”

The Ontario government has also called the project critical to the province’s economy and Premier Dalton McGuinty was on hand for the announcement to thank Harper and Snyder.

John Manley, CEO of the Canadian Council of Chief Executives, praised the agreement.

“(The) announcement of the planned construction of a second bridge is a major step forward for our bilateral trading relationship, and will mean faster, more reliable border crossings,” Manley said.

“This much-anticipated second bridge will help companies that rely on just-in-time production to keep costs down and improve their competitiveness.”

The Canadian Trucking Alliance (CTA) also gave the project a “huge thumbs up.”

“It’s been a long road to get to this day, with even more stops and starts than on Huron Church Rd.,” said David Bradley, referring to Windsor street that leads up to the bridge. “So we are thrilled the new crossing will become a reality.

Like the CTA, the Canadian Industrial Transportation Association (CITA) also had positive comments about the long-awaited deal.

“A new crossing represents a tremendous opportunity to further strengthen the economies of the US and Canada, the future of our company and many other businesses,” added Marchionne. “Undoubtedly, the new crossing will provide a secure, world-class trade and transportation infrastructure for the busiest trade corridor in the United States.”

A second bridge crossing would certainly aid Chrsyler and the other auto manufacturers keep its integrated, just-in-time manufacturing supply chain moving. Currently, for example, Chrysler sends over 1,300 component shipments and 2,000 cars and trucks over the Ambassador bridge every day. It also makes over 1,600 customs entries on a daily basis. Any delays at the border threaten the viability of the car maker’s manufacturing process.

The Canadian Chamber of Commerce president, Perrin Beatty, stressed the reasons why a second bridge is needed.

“With about half of all trade between Canada and the US moving across the Michigan-Ontario border, the region is at the heart of our bilateral trading relationship. A new bridge is long overdue.”

“The region can’t continue to rely on one major span. If the Ambassador Bridge were closed for any reason, even just for repairs, it could have catastrophic effects on the economies of both nations. A new bridge will create more than 10,000 construction jobs and will strengthen the industrial base in both countries. It’s a win for citizens and businesses on both sides of the border.”

Still, despite the excitement around the agreement, there are still many details about the project to be determined.

It’s not clear when the actual construction might start and it is at least five years from completion. Among other things, expropriation of land on the US side still has to take place.