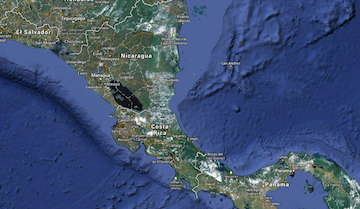 Opponents say a canal would lower the water levels in Lake Nicaragua (Photo: US Geological Survey)

MANAGUA, Nicaragua—A proposal to build a massive rival to the Panama Canal across the middle of Nicaragua was overwhelmingly backed by lawmakers, capping a lightning-fast approval process that has provoked deep skepticism among shipping experts and concern among environmentalists.

The National Assembly dominated by President Daniel Ortega’s leftist Sandinista Front voted to grant a 50-year concession to study, then possibly build and run, a canal linking Nicaragua’s Caribbean and Pacific coasts to a Chinese company whose only previous experience appears to be in telecommunications.

The legislation approved by a 61-25 vote contains no specific route for the canal and virtually no details of its financing or economic viability, simply granting the Hong Kong-based company exclusive rights to study the plan and build the canal if it proves feasible in exchange for Nicaragua receiving a minority share of any eventual profits.

Ortega’s backers say the Chinese will transform one of the region’s poorest countries by turning a centuries-old dream of a Nicaraguan trans-ocean canal into reality, bringing tens of thousands of jobs to the country and fueling an economic boom that would mimic the prosperity of nearby Panama and its US-built canal.

“One of Nicaragua’s great riches is its geographic position, that’s why this idea has always been around,” Sandinista congressman Jacinto Suarez said during the legislative debate.

“Global trade demands that this canal is built because it’s necessary. The data shows that maritime transport is constantly growing and that makes this feasible. Opposing it is unpatriotic.”

The Hong Kong company will now begin a study of the project’s feasibility that will last many months, said chief project adviser Bill Wild, one of a number of Western experts hired by the firm to provide advice ranging from engineering and environmental planning to public relations.

He said it was too early to say if a widely reported project cost of $40 billion would turn out to be accurate. While rising demand for shipping appears to make a compelling economic case for the new canal, it is impossible to predict before the study is complete if the project will turn out to be financially feasible, he said.

The canal project will require financing from international investors.

“There’s a compelling commercial reason to build the canal,” Wild said. “We have to prove now that the actual rate of return that the investors will get is adequate.”

While the company has said almost nothing about the canal’s route, it would certainly cross Lake Nicaragua, the country’s primary source of fresh water. If one of the world’s largest infrastructure projects ever is actually built, the water used by the canal’s locks could seriously deplete the lake, environmentalists say.

“Approving this is unconstitutional, fraudulent and damaging to the interests of Nicaragua. The ‘great Chinese’ don’t have the capital or the experience for a work of this size. There’s no precedent to support it,” Eduardo Montealegre, the leader of opposition legislators, said during the assembly debate.

Global engineering and shipping experts say those concerns are real and that lowered demand for massive container shipping and increasing competition from other potential routes may mean that the Nicaraguan canal will simply prove economically unfeasible.

Either way, the quick march of the canal project through the National Assembly has set off a backlash from environmental and other activists, who held a series of marches this week to protest the granting of rights to the HK Nicaragua Canal Development Investment Co, without any open bidding process or details of its financing.

“Nicaragua isn’t for sale. Nicaragua belongs to all Nicaraguans and isn’t the private property of Ortega and his family,” the Movement for Nicaragua, a coalition of civil-society groups, wrote in an open letter to the country.

When he took power in 1979, Ortega was a socialist firebrand whom the US government tried to overthrow by backing Contra rebels in the 1980s. He was voted out of office in 1990 but returned after winning the 2006 election. Since then, critics allege, the 67-year-old leader has manoeuvred to become president for life, using courts and electoral institutions that are stacked with appointees from his Sandinista Front.

In 2009 the Sandinista majority on the Supreme Court overruled limits on consecutive terms set by the Nicaraguan constitution, allowing Ortega to run for his third 5-year term and win.

Other recent Nicaraguan presidents also had repeatedly tried to win support for a canal, without much success.

Some economists express doubts about the proposed canal.

North American companies are increasingly looking to factories and suppliers in the US and Latin America rather than in Asia, where rising salaries in China are making manufacturing less appealing for foreign companies.

In addition, the global economic slowdown of recent years means large numbers of ships are unused, perhaps five per cent of the global fleet. Many vessels are scheduled to be completed in coming years, meaning the percentage of idled ships could grow to more than 20 per cent, experts said.

And global warming means that even the Arctic may become a viable alternative to crossing Central America by canal.

“Looking at the changing flows and where the growth is in the world economy, personally I’m not seeing it. I wouldn’t invest my money in it,” said Rosalyn Wilson, a senior business analyst at the Delcan Corporation, a Toronto-based transportation consultancy and author of the US logistics industry’s annual report.

“It’s addressing a need that definitely is not here now and I’m not sure if it’s ‘a build it and they will come sort of thing,”’ she said.

“There’s going be some growth in world trade. The big question is, what routes is that trade going to move on. That’s the real challenge that Nicaragua faces,” said Paul Bingham, the head of economic analysis at engineering planning firm CDM Smith, which specializes in large water and transportation infrastructure. “It’s very easy to say trade is going to grow but that doesn’t mean that Nicaragua is going to be in a competitive position to take advantage of it…I’m not convinced right now.”

Backers of previous canal plans have argued that the Nicaraguan route would prove more economical than Panama’s because it would handle ships with far larger cargo capacity.

But the Nicaraguan path would have to be roughly three times as long as than Panama’s, which is about 80 kilometres long, a fact that Panama Canal Administrator Jorge Quijano said “gives us even more of a competitive advantage.”

“It isn’t easy,” Quijano said. “The terrain is really complex, more than ours.”

Wilson also said the project could have serious impacts on Lake Nicaragua, also known as Cocibolca, because of the amount of fresh water that would be used to operate the canal.

“It takes a lot of water to run locks,” Wilson said. “Is it going to be done in such a way that’s not trading away another part of the country’s economy down the line?”

Roberto Troncoso, president of the Panamanian Association of Business Executives, said China’s government may be encouraging the new canal as a way to establish a route independent of the Panama Canal, which is perceived as remaining under heavy US influence.

“The money is totally irrelevant,” he said. “We’re talking about national hegemony. China is looking to turn itself into the predominant economic power. Whoever dominates trade, dominates the world.”

The United States has taken no official position on the Nicaraguan canal.

The Chinese company has declined to comment on the record about its funding and backers.

According to local records, HK Nicaragua Canal Development Investment Co head Wang Jing has also been a director of about a dozen other companies, some current and others that have been dissolved.

He also heads Beijing Xinwei, a mid-sized telecommunications firm that, according to Chinese media, was partly owned by a large government telecoms equipment company, Datang, which sold its shares in a 2010 restructuring.

Panama and Nicaragua were the top contenders for the route of a trans-ocean canal from the first arrival of Europeans in Latin America. A French company began excavating the Panama canal in 1880 but work was halted by rampant tropical diseases such as malaria and yellow fever. The project was sold for $40 million to the United States, which finished it in 1914.

Historians say 5,609 people, mainly West Indian workers, died during its construction, on top of the 22,000 dead during the period of French control.