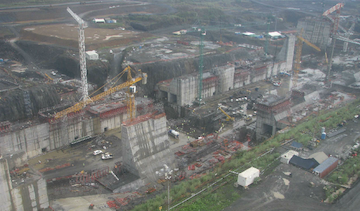 PANAMA CITY, PANAMA—On a hot September morning, a powerful explosion demolished a rocky slope on the banks of the Panama Canal, announcing to the world a massive expansion that the canal’s managers promised would transform global trade when it was completed in 2014, on time and under budget.

US ports invested billions in dredging, raising bridges and renovating docking infrastructure to accommodate the new generation of larger ships that could pass through the expanded canal.

Now, more than four years after construction began, these ports and the Panama Canal Authority are facing the prospect of a work stoppage on the US$5.25 billion expansion over a financial dispute—an unexpected blow to a project long seen by many as the epitome of competent management in a region where many major infrastructure initiatives are marred by cost overruns, delays and shoddy workmanship.

The Spanish-led consortium hired to handle the biggest part of the canal expansion says it will halt work by  January 20 if the canal authority doesn’t come up with the funds to cover $1.6 billion in cost overruns, while the authority insists the consortium live up to the terms of the original contract.

The expansion project, now 72 percent complete, would double the capacity of the 50-mile (80-kilometre) canal, which carries between five and six percent of world commerce.

“Monday will be a crucial day in the history of the Panama Canal and for us as a country that wants to carry out projects of great size,” Jose L. Ford, the president of the Panamanian Chamber of Commerce, Industry and Agriculture, said after meeting with canal authority directors last week.

A stop-and-restart of the canal expansion, one of the largest construction efforts in the world, could mean a delay of months or even years, setting back the arrival of bigger ships, and higher fees, to ports along the entire U.S. East Coast, some of which have been carrying out their own improvements. The ships known as post-Panamax have more than twice the carrying capacity of those able to pass through the canal today.

“I am hopeful that the dispute can be resolved expeditiously,” said PortMiami Director Bill Johnson. “Dredging is now well underway and we are scheduled for a mid-2015 completion date. Let’s hope the canal can also stay on schedule.”

The canal-building consortium, United for the Canal, blames the cost overruns largely on problems with the studies carried out by the Panamanian authority before work began. It says that geological obstacles it has encountered while excavating have prevented it from getting the basalt it needs to make the massive amounts of cement required for the expansion.

Many experts say the root of the conflict lies in the consortium’s underestimation of the project’s costs when it won the canal expansion contract in 2009 by submitting by far the lowest bid: $3.1 billion for its portion of the job, $1 billion less than a bid led by the U.S. construction giant Bechtel.

Some, particularly in Panama, suspect the low bidding was carried out in bad faith by a company hoping to dramatically increase its billing in the event of cost overruns, just as is occurring now.

Sacyr, the company that heads the consortium, denies any reckless underbidding.

Both sides say they are working hard to reach a deal as the deadline nears. In Spain, there is a sense of confidence in an amicable resolution, reflected in the recovery of the value of Spain’s Sacyr Vallehermoso,  which saw its stock plunge after the dispute become public this month.

Sacyr’s president, Manuel Manrique, promised Monday that work on the expansion would be completed in 2015 and assured the public and investors that negotiations were on the right path.

Still, the Panama Canal Authority, an autonomous and self-funded government agency, is preparing for the worst.

Canal Administrator Jorge Quijano has planned a Tuesday meeting with the authority’s insurance company, Zurich America, to plan possible next steps if a deal fails to materialize. He said the canal authority is prepared to take over the job in February and spend as much as $1.5 billion more to complete the bigger canal.

“We want United for the Canal to finish the job,”Quijano said. “Our intention is to find a way to get that done. That’s what’s best for the contractor and for us, but we also have to be ready in case they give up.”

The Spanish-led consortium warns that the canal authority taking over from it could cause a delay of as much as three years.

“If the canal authority has to take over the job and look for companies it will have to oversee until the work is done, obviously there will be delays that are inconvenient for Panama, the canal and the entire world, which already has post-Panamax ships getting ready to be delivered,” said Roberto Eisenmann, founder of the influential newspaper La Prensa and an expert on the canal expansion.

The canal authority proposed on January 7 that it inject another $183 million, with the consortium putting in $100 million, to cover construction costs for the next few months while the sides attempt to strike a permanent deal.

The consortium insisted the authority pay between $400 million and $1 billion.

In Panama, people are rallying behind the canal authority.

“It looks like it’s come down to us to finish the canal,” said 80-year-old retired teacher Carlos Samaniego. “We can’t have any confidence in a business that’s threatening us with a work stoppage. The canal is our life.”

Kathia Martinez in Panama City, Jorge Sainz in Madrid, David Fischer in Miami and Michael Weissenstein in Mexico City contributed to this report.