Cargo thefts and attacks increasing in Gulf of Guinea 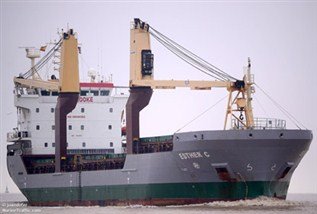 KANO, Nigeria—Three sailors—including two Russians—have been freed following weeks in captivity after pirates raided their cargo ship off the coasts of Nigeria and Cameroon, a shipping company said Monday.

Carisbrooke Shipping Ltd of the United Kingdom issued a statement saying the men had been released after the February 7 attack on the MV Esther C.

“The three officers were confirmed as being safe and in good spirits on March 11 after 31 days in captivity,” the company said.

The company did not say whether a ransom had been paid to secure the sailors’ freedom. Such kidnappings typically end with a ransom payment being made, usually in the hundreds of thousands of dollars.

Pirates attacked the vessel some 130 kilometres (80 miles) off Nigeria’s coast. The company previously said the pirates stole the sailors’ personal belongings before leaving with the three sailors.

Russia’s foreign ministry previously identified two of the sailors as being Russians.

The attack on the cargo ship came in a series of escalating assaults in the Gulf of Guinea, which follows the African continent’s southward curve from Liberia to Gabon.

Piracy in the Gulf of Guinea has escalated from low-level armed robberies to hijackings and cargo thefts. Last year, London-based Lloyd’s Market Association—an umbrella group of insurers—listed Nigeria, neighbouring Benin and nearby waters in the same risk category as Somalia, where two decades of war and anarchy allowed piracy to flourish. But as piracy has dropped in recent months off Somalia’s coast, it’s only risen in the Gulf of Guinea.

Pirates in West Africa also have been more willing to use violence in their robberies, as they often target the cargo, not the crew for ransom as is the case off Somalia. Experts say many of the pirates come from Nigeria, where corrupt law enforcement allows criminality to thrive and there’s a bustling black market for stolen crude oil.