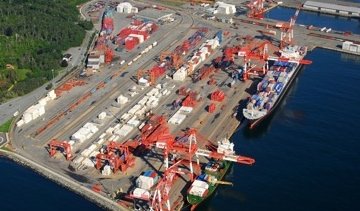 Halifax: Macquarie Infrastructure Partners, the owner of Halterm Container Terminal Limited, will invest in two additional Super post-panamax cranes (SPPX) at the Port of Halifax. In 2012, the Port of Halifax will feature four SPPX container berths equipped with seven SPPX cranes following the addition of the new cranes.

“The investment in new cranes is indicative of Halterm’s confidence in the long-term strength of the Halifax market,” said Ashley Dinning, CEO of Halterm Container Terminal Ltd.

The Port of Halifax features the deepest container berths on the eastern seaboard and can handle vessels of any size. Existing capacity at the port can accommodate a tripling of container volumes. A $35-million terminal project now underway includes the extension and deepening of the pier which provides operational flexibility to accommodate two of the world’s largest vessels simultaneously.