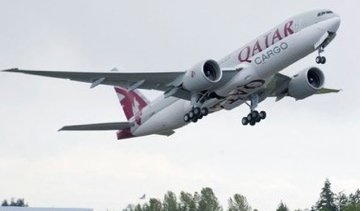 DOHA, QATAR: Qatar Airways’ cargo division will begin scheduled dedicated freighter services to three North American destinations: Atlanta, Houston and Toronto. The company will use Boeing 777 freighters for the service and will fly from its hub in Doha via Luxembourg.

Atlanta and Houston will be served with twice-weekly flights starting November 2, while the Toronto weekly services will begin November 7. In North America, Qatar Airways now operates dedicated freighters only to Chicago. The carrier also flies daily non-stop passenger services to Houston, New York and Washington, together with thrice-weekly flights to Montreal, offering sufficient cargo space in the belly of the aircraft.

Meanwhile, Qatar Airways’ passenger services to Jeddah in the Kingdom of Saudi Arabia will be supplemented with a weekly cargo flight, beginning October 30. Extra cargo flights will operate to Chicago, Colombo, Bahrain, Dammam, Hong Kong and Tehran from October 30.

Qatar Airways Group CEO Akbar Al Baker said the airline’s dedicated cargo network was an extension of the airline’s strategy to develop its global air transport business. “With the recent completion of our 35 percent stake in Cargolux, Europe’s largest cargo airline, we have increased our focus on freighter operations, which ties seamlessly into the airline’s strategy to have as many connecting points across the globe from our Doha hub,” said Al Baker. “We have identified tremendous route expansion opportunities around the world, including North America where the freighter market is huge.”

Qatar Airways Cargo currently has a fleet of three Airbus A300-600s and two Boeing 777 freighters. The Boeing 777F aircraft has the longest range of any twin-engined freighter, and is based on the Boeing 777-200 Long Range aircraft.