Strike continues at ports of Long Beach and Los Angeles

Some ships diverting, others stuck in port

November 30, 2012
by MM&D staff with files from the Canadian Press 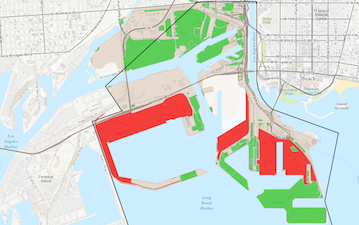 November 30, 2012
by MM&D staff with files from the Canadian Press

LOS ANGELES and LONG BEACH, California—A strike by clerical workers in California continues to halt activities at ports of Los Angeles and Long Beach, even as both sides say they are ready to resume negotiations.

According to the Los Angeles/Long Beach Harbor Employers Association, “The strike has already had a severe impact on the flow of cargo and on jobs in the harbor community, with multiple ships sitting idle at berth or at anchor in the harbor.”

By Thursday morning, at least 18 ships docked and inside the adjacent harbours were not being serviced, port representatives said.

“It’s essential that both sides in this labor dispute return to the negotiating table and resolve this now. We are starting to see ships divert to other ports, including to Mexico,” said Port of Los Angeles director, Geraldine Knatz. “In today’s shipping environment, we can’t afford to lose cargo or our competitive advantage.”

The striking workers are members of the International Longshore and Warehouse Union Local 63’s Office Clerical Unit (63-OCU) and have been without a contract for two-and-a-half years. Besides the lack of a contract, they are also protesting the off-shoring of clerical jobs. Other unionized port workers have refused to cross picket lines in support of 63-OCU.

The Associated Press is reporting says the Harbor Employers Association invited the union back to the negotiating table, and the ILWU accepted, although there are no reports on whether the talks actually took place and if they did what (if any) actual outcome occurred.

Numerous parties have waded into the dispute offering opinions and issuing calls for action.

The Mayor of Los Angeles, Antonio Villaraigosa, appealed to both sides to return to bargaining. The union has posted statements of support from a number of politicians, including congresswomen Judy Chu, Linda Sánchez, and Grace Napolitano and California state senator Alan Lowenthal, on its website.

In a letter to Barack Obama, the National Retail Federation urged the US president “to immediately engage in the stalled contract negotiations between management and striking union workers at the nation’s largest ports”.

NRF president and CEO Matthew Shay wrote in the letter: “A prolonged strike at the nation’s largest ports would have a devastating impact on the US economy. We call upon you to use all means necessary to get the two sides back to the negotiating table.”

The Los Angeles and Long Beach ports handle over 40 percent of imports into the US.