Terminals at ports of Los Angeles and Long Beach closed 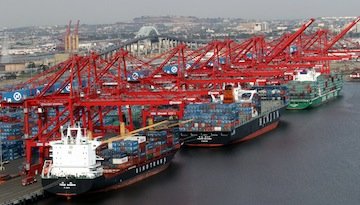 The 800 clerical workers, who are members of the International Longshore and Warehouse Union Local 63’s Office Clerical Unit (63-OCU), set up picket lines on Tuesday. The job action resulted in the closing of three of six container terminals at the Port of Long Beach (Container Terminal at Pier F, International Transportation Service at Pier G and Total Terminals International at Pier T) and Reuters is reporting that seven of eight terminals at the Port of Los Angeles were also affected by the strike, which began at the port’s Pier 400.

The clerical employees have been working without a contract since June 30, 2010 when their previous three-year contract expired.

The union says that in addition to the lack of a new contract, the employees want to put an end to job outsourcing practices.

“We’ve been meeting with the companies for more than two years, but they’re still concealing their outsourcing—even when they’ve been caught red-handed,” said 63-OCU president John Fageaux. “These employers seem to have an insatiable appetite for outsourcing.

“It’s not about wages and benefits, it’s about outsourcing and the future of good jobs in America and our harbour communities. We just reached the point where somebody had to stand-up and draw the line against outsourcing, because these companies will eventually take all the good jobs.”

He added that there have been over 50 permanent positions lost to outsourcing in the last five years, and says an additional 76 are scheduled to disappear.

“This outsourcing isn’t being done by little mom-and-pop operations; these are powerful multinational corporations who aren’t respecting the local communities. These guys can outsource a good-paying job to Taipei with the push of a button, and seem to care less how it impacts a family living in the harbour area,” added ILWU International vice-president Ray Familathe.

The strike actions are expected to continue today.