Container terminal in the cards 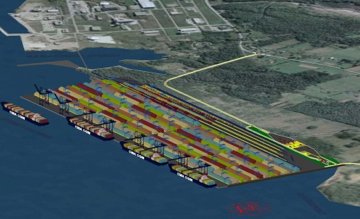 Officials in the Cape Breton Region Municipality don’t seem too concerned if their plans for the Sydney port earn them a few enemies. They’re convinced the benefits will be worth it.

The idea is to build a container terminal in the harbour able to handle the oversized ships soon to be passing through the Suez Canal.

Until a few months ago, the port wouldn’t have been able to accommodate the vessels, but now a dredging project has been completed, making the channel 16.5m deep, which provides enough draft for the large ships. The dredging costs of $38 million were mostly shared across three levels of government, with some contributions from the private sector, including $1 million from Nova Scotia Power.

“In a lot of ports in eastern North America—in the US in particular—the dredging work that needs to be done tends to be a long process, so that’s why we’re trying to get out there before many of these other ports and see if there is any take-up. We’re fortunate that it only took us a year to do the dredging. In many ports it’s multiple years and hundreds of millions of dollars in cost,” says John Whalley, economic development manager for the Cape Breton Region Municipality.

While it may seem like a large amount of money to spend on a speculative project, Whalley says the dredging has been worth it.

“A fairly significant investment was announced by a company called Provincial Energy Ventures on the order of $70 million for the port as a result of the dredging. They have a coal trans-shipment business they do through Sydney Harbour. There has also been interest from a company called Severstal to create an iron ore production facility—an iron ore pellet plant basically—in Sydney Harbour, also as a result of the dredging.

The site designated for the new cargo terminal is a greenfield property—82 hectares (450 acres) of undeveloped land with what Whalley estimates as 500m of waterfront. Plus there’s an additional 60 hectares (150 acres) of adjacent in-filled property. The municipality bought the land for $6 million.

A railing siding is relatively close by—about half a kilometre away—and Whalley says the municipality will help connect the terminal to the tracks, and to install other basic utilities.

He admits attracting cargo shipping companies to a blank canvas in an unfamiliar area won’t be easy.

“There are enormous challenges in attracting people into a new port, but as the industry changes, it also gives these companies new opportunities as well and that’s really the pro and con of greenfield sites. Nothing is there but you are also not hooked into legacy agreements with labour. You have a free hand in developing a site that would be consistent with modern security requirements and developing a site that would be efficient. And this is an enormous site within 10 nautical miles of the main international shipping route between North America and Europe.”

While he is excited about the potential benefits of a terminal, especially the tendency they have to attract additional businesses and additional terminals, and to give local labourers the opportunity to work at home rather than heading to the western oil patch to find jobs, he admits the project has its detractors.

He also mentioned that the region’s efforts aren’t likely to help foster any goodwill amongst other Atlantic Canada terminal operators.

“There is a port known as the Melford Container Terminal which is not that far away. They’re also marketing a greenfield property so they probably see us as a threat. I know traffic in Halifax has been variable and has been down in recent years fairly significantly. I’m not sure how Halifax views Sydney. I don’t think they view it as a complement. I think they view it as a threat as well.”

While he may not be able to look to local harbours for support, he does look to BC’s Prince Rupert terminal for inspiration, especially when it comes to attracting shipping companies.

“This is not easily done, but it was done in Prince Rupert. So that gives us some level of hope. If you look at traffic numbers for Prince Rupert, they’re growing quite tremendously. And they are in to planning the second phase of development right now. It gives us hope. I think it can happen.”