Sensors to measure delays at Queenston-Lewiston and Peace Bridges. 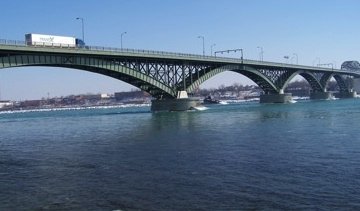 FORT ERIE, Ontario: Starting today, nobody will have to wait to receive wait-time information about the Queenston-Lewiston Bridge or the Peace Bridge.

A new sensor-based technology that measures and reports delays at the Ontario-New York bridges was announced by federal minister of justice and attorney general Rob Nicholson.

The data, which is to be delivered in real time, will provide reliable information that will be used to manage traffic volumes. The government also claims the new system will “reduce environmental impacts by decreasing vehicle emissions from border congestion and delays”, and “ensure more efficient border operations by allowing border agencies to focus resources on security.”

But it’s just the idea of having the data that will be of most benefit, says Stephen Laskowski, senior vice-president of the Canadian Trucking Alliance.

“There has been a long, steady attempt at decreasing wait-times, but it’s often done using conflicting or repudiated numbers. This levels the playing field and provides one real-time metric. From here we’ll be able to judge how effective we are at becoming more more efficient.”

The system is being promoted as a route-planning tool. By knowing exactly how long each border delay is, drivers will be able to make informed choices about which bridge to cross, and by picking the crossing with the shortest wait, the government estimates “reduce[d] border wait times for the travelling public and commercial carriers by up to one million hours per year”.

But as to whether truck drivers will really be able to take advantage of the data and reroute to the bridge with the fastest moving traffic, that’s not guaranteed, says Laskowski. It will depend on a wide variety of factors, including the ultimate destination, how the Customs brokers report shipments in advance, and the flexibility of the companies.

“It will allow certain carriers to reroute trucks,” says Laskowski. “Most importantly, it allows carriers to have a sense of what’s happening.”

While it’s just one small change, Laskowski says even tiny improvements to traffic management at bridges and border crossings are beneficial.

“It’s not a silver bullet to fix everything. It’s a series of measures and continual improvement.”