Windsor developing into a cargo hub 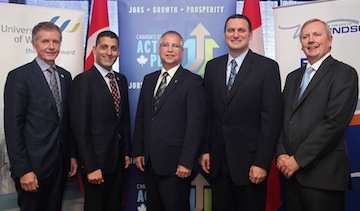 WINDSOR, Ontario—Plans are underway to turn Windsor, Ontario into an international cargo handling centre of excellence.

Two major cargo-focused projects have received funding from the federal government. The first is the the creation of the Institute for Border Logistics and Security (IBLS) at the University of Windsor. IBLS has been granted $7.3 million from the government’s Federal Economic Development Agency for Southern Ontario (FedDev Ontario). The purpose of the institute is to engage in research leading to the development of new concepts, applications and approaches to logistics, security, and international trade. It will also pay attention to the overall long-term economic health of City of Windsor and the surrounding region.

IBLS will also work with SMBs to aid in the research and development of new products with the goal of prototyping, real-world testing, and commercializing the products for the global market.

FedDev Ontario has also committed $12.6 million to Your Quick Gateway (YQG) Inc. YQG is a corporation owned by the City of Windsor, which operates Windsor International Airport on behalf of the City. The funding, along with $2.4 million from the city, will be put toward the development of a 10,000sqf facility at the airport which will serve as the headquarters of IBLS and will house the researchers who are working with the SMBs on real-world project testing.

YQG is also constructing a 35,000sqf building at the airport which will be leased to FedEx Express for a new cargo handling business, as well as a 27,000sqf building to house businesses attracted by the airport/FedEx cluster. FedEx Express has committed to a 20-year lease, and will move 51 employees from an existing Windsor-area operation into the new facility.

The airport has also decided to build a multi-modal cargo terminal with the intention of spurring the further growth and development of the Windsor-Detroit logistics corridor.