Port of Belledune gets investment in new capacity 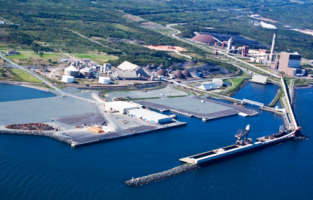 BELLEDUNE, N.B. – The New Brunswick government has announced a $7-million investment to increase capacity at the Port of Belledune.

The funding includes a $5-million grant and a loan of up to $2 million under the Northern New Brunswick Economic Development and Innovation Fund.

The assistance is part of a $21-million expansion project that will fill in the water gap between two terminals and enlarge the berth by 15,000 square metres.

It’s expected the work will improve the port’s ability to move cargo between terminals and to and from ships, while creating additional space for commodities.

Premier Blaine Higgs is to visit the port on Chaleur Bay today to view the construction and to hear about its future plans.

Denis Caron, the port’s chief executive officer, says the port supports just over 3,000 direct and indirect jobs across the province.