On March 1 Dr. Ngozi Okonjo-Iweala becomes the first woman and the first African to be chosen as director-general

February 24, 2021
by Inside Logistics Online Staff

February 24, 2021
by Inside Logistics Online Staff 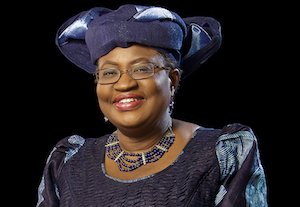 When she takes office on March 1, Dr. Ngozi Okonjo-Iweala will become the first woman and the first African to be chosen as director-general of the World Trade Organization (WTO). Her term, renewable, will expire on 31 August 2025.

Okonjo-Iweala said a key priority for her would be to work with members to quickly address the economic and health consequences brought about by the COVID-19 pandemic.

“I am honoured to have been selected by WTO members as WTO director-general,” she said.

“A strong WTO is vital if we are to recover fully and rapidly from the devastation wrought by the COVID-19 pandemic. I look forward to working with members to shape and implement the policy responses we need to get the global economy going again. Our organization faces a great many challenges but working together we can collectively make the WTO stronger, more agile and better adapted to the realities of today.”

Ngozi Okonjo-Iweala is a global finance expert, an economist and international development professional with over 30 years of experience working in Asia, Africa, Europe, Latin America and North America. Currently, she is chair of the board of Gavi, the Vaccine Alliance.

She sits on the boards of Standard Chartered PLC and Twitter Inc. She was recently appointed as African Union (AU) Special Envoy to mobilize international financial support for the fight against COVID-19 and WHO Special Envoy for Access to COVID-19 Tools Accelerator.

She is a skilled negotiator and has brokered numerous agreements which have produced win-win outcomes in negotiations. She is regarded as an effective consensus builder and an honest broker enjoying the trust and confidence of governments and other stakeholders.

Previously, Okonjo-Iweala twice served as Nigeria’s Finance Minister (2003-2006 and 2011-2015) and briefly acted as Foreign Minister in 2006, the first woman to hold both positions. She distinguished herself by carrying out major reforms which improved the effectiveness of these two ministries and the functioning of the government machinery. She had a 25-year career at the World Bank as a development economist, rising to the No. 2 position of managing director, operations. As a development economist and Finance Minister, Dr Okonjo-Iweala steered her country through various reforms ranging from macroeconomic to trade, financial and real sector issues.

She is renowned as the first female and African candidate to contest for the presidency of the World Bank Group in 2012, backed by Africa and major developing countries in the first truly contestable race for the world’s highest development finance post. As managing director of the World Bank, she had oversight responsibility for the World Bank’s US$81 billion operational portfolio in Africa, South Asia, Europe and Central Asia.

Okonjo-Iweala spearheaded several World Bank initiatives to assist low-income countries during the 2008-2009 food crisis and later during the financial crisis. In 2010, she was Chair of the World Bank’s successful drive to raise $49.3 billion in grants and low interest credit for the poorest countries in the world.

“This is a very significant moment for the WTO. On behalf of the General Council, I extend our warmest congratulations to Dr Ngozi Okonjo-Iweala on her appointment as the WTO’s next Director-General and formally welcome her to this General Council meeting,” said General Council Chair David Walker of New Zealand who, together with co-facilitators Ambassador Dacio Castillo (Honduras) and Ambassadar Harald Aspelund (Iceland) led the nine-month DG selection process.

“Dr Ngozi, on behalf of all members I wish to sincerely thank you for your graciousness in these exceptional months, and for your patience. We look forward to collaborating closely with you, Dr Ngozi, and I am certain that all members will work with you constructively during your tenure as Director-General to shape the future of this organization,” he added.

The process for selecting a new Director-General was triggered on 14 May when former Director-General Mr Roberto Azevêdo informed WTO members he would be stepping down from his post one year before the expiry of his mandate. He subsequently left office on 31 August.