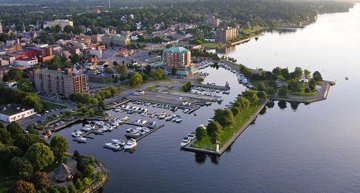 CORNWALL, ON: In an effort to promote itself to transportation companies, 3PLs and retailers, a delegation of eastern Ontario municipalities is attending Logistics 2012 as an exhibitor.

The Ontario East Logistics Marketing Team represents the City of Brockville, the City of Cornwall, the County of Lennox and Addington, the County of Northumberland, the Bay of Quinte Region, the Town of Smiths Falls and the United Counties of Stormont, Dundas and Glengarry.

According to a statement, the purpose in attending the trade show which bills itself as “Retail’s Supply Chain Conference” and is put on by the Retail Industry Leaders Association, is to “to leverage existing activity in the supply chain sector in Eastern Ontario to attract new investment.”

The same statement notes the region is already “home to major distribution centres for Walmart, Sears, Shoppers Drug Mart and Tim Horton’s amongst many others. Target is currently building a new 1.3 million sqf distribution centre in Cornwall and numerous transportation companies are growing in size throughout the region to accommodate increased activity.”

A logistics directory listing area companies will be handed out at the conference.

The conference, which is taking place in Dallas, began on February 19 and will run until February 22.