Nicholas-P. Pedneault, president and CEO of Congebec, has become the majority shareholder of the company he’s been managing since 2015 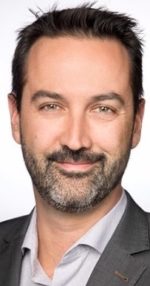 QUEBEC – Nicholas-P. Pedneault, president and CEO of Congebec, has become the majority shareholder of the company he’s been managing since 2015. Three members of his management team will join him as co-shareholders: Guy Clairmont, vice-president of Finance; Richard Patenaude, vice-president of sales and operations; and France Pomerleau, vice-president of human capital, regulatory compliance and communications.

Congebec turned to Desjardins Business, which partnered with Desjardins Capital, Investissement Québec and Fondaction to act as the company’s lenders.

“I want to thank Desjardins Capital, Investissement Québec and Fondaction for their support in 2015, which made it possible for Congebec to be transferred to the next generation,” said Pedneault.

“Each year, close to $2 billion of food passes through our facilities. In an industry that’s seeing more and more international consolidation, it’s important to offer the food industry an independent Canadian supply chain with logistics expertise and nation-wide service.”

Established in Quebec City in 1974, Congebec is a Canadian supplier of multi-temperature food storage and distribution services supporting the food, retail, and consumer packaged goods industries.

From its beginnings in Quebec with one warehouse, the company expanded in 1998 with the addition of a facility in Montreal. By 2004 the company had grown to be the largest warehouse operator in Quebec. In 2011 it expanded outside the province with a facility in Toronto,and in 2013 added three facilities in western Canada through the acquisition of Westco Multitemp Distribution Centers Inc.

With more than 500 employees, the company now operates 13 facilities, totalling more than 57 million cubic feet. These facilities are located in Quebec, Ontario, Manitoba, Saskatchewan and Alberta.

The company has doubled its sales over five years.

“Desjardins Capital has stood by Congebec since 2004,” said Luc Ménard, COO of Desjardins Capital. “The buying back of share capital by the company’s very own senior management is very much in line with our business model, which strives to support homegrown businesses and keep them in Quebec. We’re also very pleased that the board of directors we set up within Congebec in 2015 is still in effect today.”

Desjardins Capital is a subsidiary of Desjardins Group has assets of $2.6 billion, invested in approximately 530 companies, cooperatives and funds in various sectors across Quebec.

“The food industry depends on high-functioning supply chains. A company like Congebec is an essential player in this field, which is why it made sense for Fondaction to help it grow and take part in its transfer to a new generation of management,” said Claire Bisson, deputy chief investment officer at Fondaction, which manages $2.4 billion in assets from the retirement savings of more than 175,000 shareholders. It backs more than 1,200 SMEs involved in various areas of the social economy.

Investissement Québec operates across the province investing in businesses of all sizes.