Fresh and frozen products to be handled in Terrebonne, Quebec

March 11, 2020
by Inside Logistics Online Staff

March 11, 2020
by Inside Logistics Online Staff 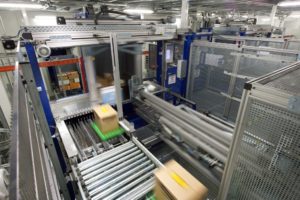 Witron’s palletizers are key to the automation.

MONTREAL – Metro Inc. will invest $420 million over five years in the construction of a new, automated distribution centre for fresh and frozen products in Terrebonne, just north of Montreal.

It is also planning an expansion of its produce and dairy products distribution centre in Laval.

It is being built with an automated system from Witron, with whom the company is already working in Ontario, where similar facilities are currently under construction.

The new distribution centre will be more than 600,000 square feet.

The centerpiece of Witron’s automation is the COM (Case Order Machine) – a palletizer that builds mixed, densely packed pallets to save transportation costs. In the new Terrebonne facility, 12 COMs in the fresh zone and nine COMs in the freezer will pick up to 285,000 cases every day. The entire system will handle approximately 6,800 SKUs in the freezer and a fresh zone.

President and CEO Eric La Flèche said the new DC will improve accuracy and reduce handling time. “We will be in an excellent position to pursue our growth in Quebec,” he said.

The produce and dairy products distribution centre in Laval will be expanded by 50,000 square feet to handle an increased volume of fruits and vegetables. Dairy products will then be distributed from the new Terrebonne facility.

The company says that although the new DC is automated, growth projections, combined with the integration of volumes currently distributed by third parties, will allow for stable employment levels in Quebec. The company says it will work with its employees and the unions involved to facilitate the transition, including the implementation of the required training programs.

Metro Inc. operates or services a network of some 950 food stores under several banners including Metro, Metro Plus, Super C and Food Basics, as well as some 650 drugstores primarily under the Jean Coutu, Brunet, Metro Pharmacy and Food Basics Pharmacy banners, and employs almost 90,000 people.