Just over 100,000 mobile robots (AGVs and AMRs) were shipped globally in 2021, the first time this milestone has been reached, according to data in our latest report.

The current labour shortage, coupled with strong e-commerce growth, has accelerated manufacturing and logistics companies’ plans to automate. This has caused sales in mobile robots to spiral, with nearly 70 percent more vehicles shipped than the year before and a 36 percent increase in revenues, which rose to nearly US$3 billion.

It is regularly claimed that robots will steal jobs from people. But in the post-Covid world we are seeing the opposite: robots are filling gaps left by widespread labour shortages. This is particularly the case in e-commerce warehouses.

AGVs are a firmly established technology that has been around for 40-plus years. But they have been challenged by AMRs for some time and, in 2021, global AMR revenues of $1.6 billion finally surpassed those of AGVs by nearly $300 million.

Meanwhile, last year, Locus Robotics became the first AMR company in the world to achieve ‘unicorn’ status with a billion dollar valuation. Within the AMR sector, person-to-goods (P2G) robots have grown especially strongly. Having proved themselves as a concept, they are now moving into a major roll-out phase. One example is DHL’s recent investment in 2,000 P2G robots.

China accounted for almost 40 percent of the 100,000 worldwide mobile robot shipments last year. The USA came in second accounting for just over a quarter. We expect both countries to maintain those shares up to 2025, when close to two million robots will have been installed.

The market in general has some obvious drivers, and mobile robots are most attractive in regions that feature a high labour cost, low unemployment, and high e-commerce penetration.

Compare this to India, where labour is much cheaper. That country, with well over a billion in population, shipped only 566 mobile robots in 2021, this will rise to only 2,700 by 2025.

The mobile robot market is heavily driven by demand from logistics, particularly e-commerce. And the big growth story is in general merchandise, which includes all retailers with the exception of the apparel and grocery sectors. There were over 22,000 shipments of mobile robots to general merchandise retailers in 2021 and the only sector that came anywhere close in terms of orders was automotive manufacturing with over 15,000 units. 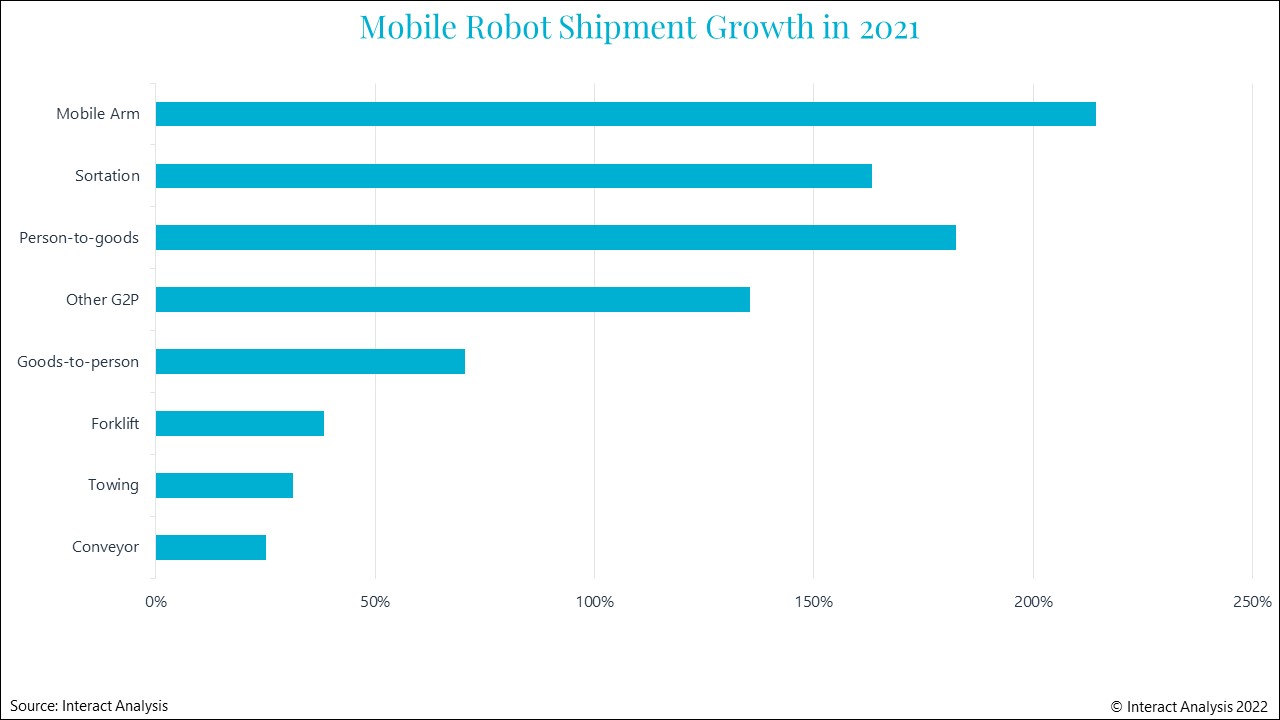 Third party logistics (3PL) firms are the other big growth story for mobile robot technology. These companies have long needed automation, yet up until recently have struggled to justify the investment given the typically short customer contract lengths they suffer from. While large-scale, integrated automation solutions can cost upwards of $5 million and take seven-plus years to get an ROI, mobile robots can be added at a fraction of that cost and scaled up easily.

At the same time 3PL business is booming. That’s because the pressures caused by Covid have resulted in numerous companies turning to 3PL providers to solve sudden logistical problems. Other sectors, such as apparel, will see similar, sometimes even bigger increases in percentage terms, though from lower baselines.

This article was republished from Interact Analysis.