28,500 warehouses to be added globally to meet e-commerce boom

The shift to online sales, exacerbated by the pandemic, as well as demand for consumer goods in developing regions will require 28,500 additional warehouses to be added in the next five years

Globally there were 150,000 warehouses at the end of 2020 and roughly 25 billion square feet of space (about twice the size of entire city of San Antonio, TX). Though North America and Europe have a disproportionately high quantity of warehouses relative to their population, most of the current warehouse footprint and future growth lies outside these regions with the burgeoning middle class and demand for retail goods in developing countries.

By the end of 2025 there will be nearly 180,000 around the world. By then, the top five countries, China, United States, Japan, India, and Germany will account for more than half of world warehouse building stock. 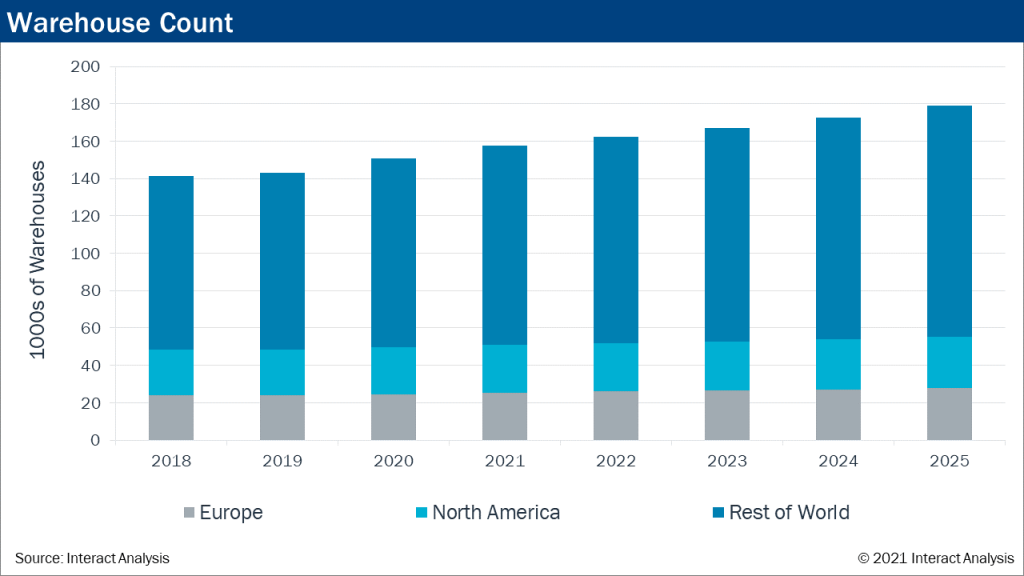 Most of the warehouse opportunity lies outside North America and Europe.

Online ordering had been steadily gaining share since its nascent dotcom days. According to the U.S. Census, e-commerce steadily marched from 4.5 percent of total retail sales in 2011 to about 10 percent on the eve of the pandemic in late 2019. Then, a once-in-a-generation public health crisis catapulted online sales to roughly 15 percent. In less than a year, U.S. online penetration rose as much as it did the previous decade in terms of market share. 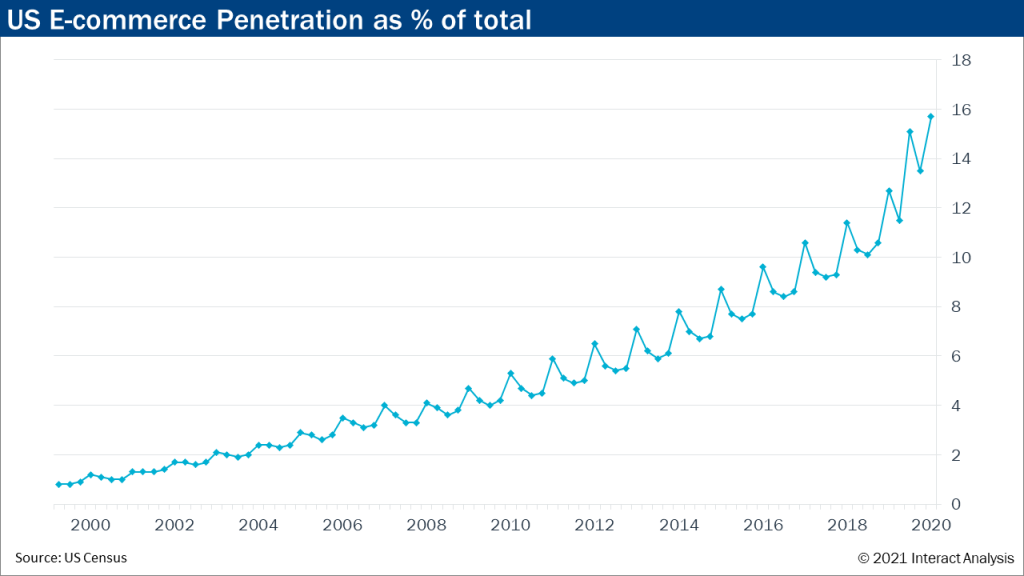 The methodical march of e-commerce in the past decade, punctuated by a pandemic-induced spike.

In the case of the marquee names of retail, the big have gotten bigger. In February 2021, Amazon reported its highest-ever earnings, surpassing US$100 billion in quarterly sales for the first in its history. Walmart’s online business was up 79 percent in the quarter that ended October 31, 2020. Retail rival Target saw its e-commerce sales surge a scintillating 154 percent in the same period.

How much of this e-commerce momentum will survive post-pandemic? It is too early to say with certainty, but it is reasonable to assume that while the unprecedented growth in e-commerce is likely to temper, it will continue towards greater penetration into the foreseeable future.

There is a rough rule of thumb that states for every $1 billion in online sales, one million square feet of warehousing is needed to support it. While this is generally accurate, it oversimplifies individual industry dynamics. For example, online grocery sales are overwhelmingly fulfilled in-store as opposed to warehouses.

On the other hand, major online retailers tend to average under $700 of revenue per square foot of warehousing. Moreover, there is a wide range of e-commerce maturity levels around the world. China’s online sales dwarf the US.

Conversely, dozens of smaller countries are a drop in the $2.5 trillion global bucket. Thus, the fulfillment footprint will vary considerably depending on where you look. All-in-all, fulfillment warehouse space is forecast to top six billion square feet sometime in 2025. 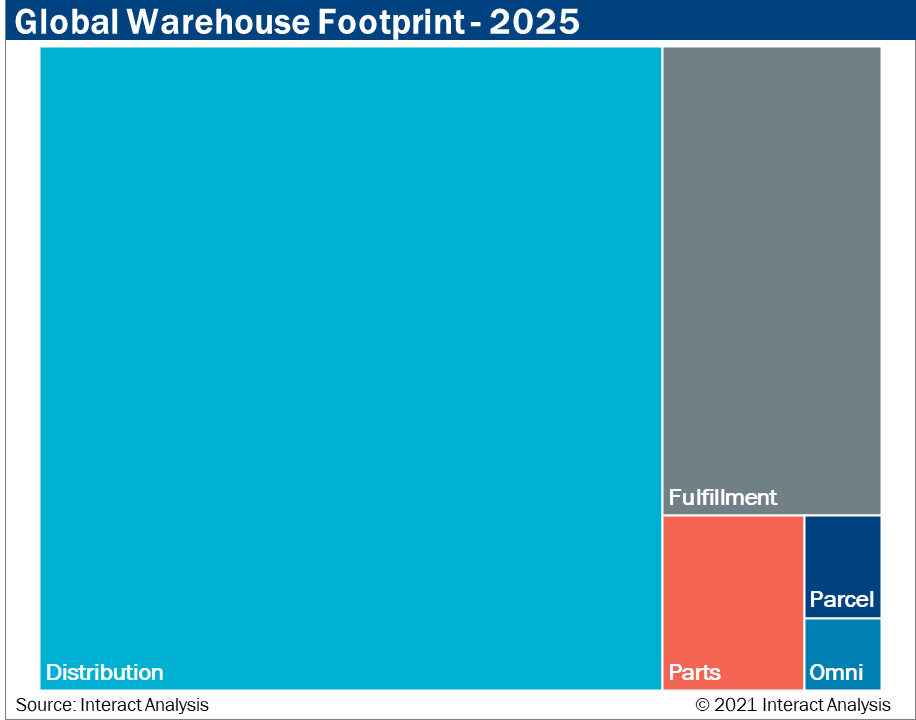 The direct-to-consumer fulfillment warehouse segment will increase as a result of the growth of e-commerce.

Implications on labour and automation 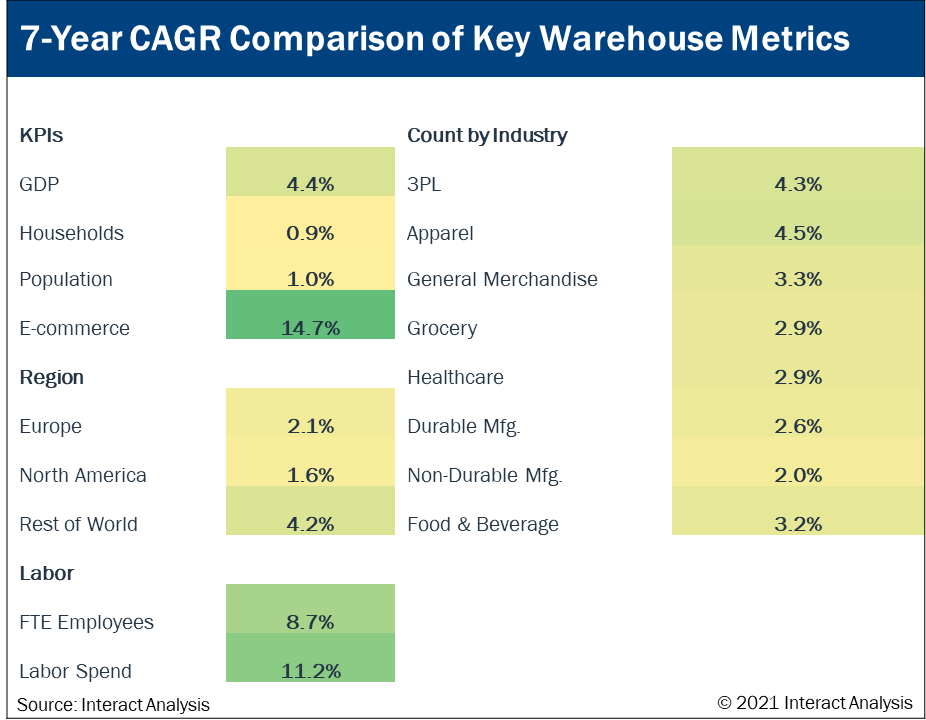 A comparison growth in warehouse parameters from the 2018-2025 with e-commerce and labor as standouts.

The expanding global warehouse footprint, along with the rise of fulfillment centres, will require a 50 percent increase in staffing by 2025. Piece-picking orders are far more labour-intensive as compared with palletized distribution centres.

Together with the challenges presented by COVID-19, competition for labour has been tight in some markets. This is where automation projects to facilitate the increased volumes and decreased delivery times have surged.

Still, with an estimated 60 percent of all warehouses being operated in regions where the cost of labour is under $10 per hour, this very much remains a manual enterprise.

This analysis is based on Interact Analysis’s recently published, “Warehouse Building Stock Database”. The database is a comprehensive and systematic assessment of global warehouse demand that examines market sizes, footprints/counts/types of warehouses, and labour demand across 30 countries and eight industries. For more information, please click here.