Two significant drivers have caused the warehouse market to heat up in recent years. One is the rapidly developing middle class in many developing world countries, which has caused demand for consumer goods (and the warehouses required to store them) to boom.

China leads the world in e-commerce penetration – in 2020, it was estimated that China accounted for 46 percent of global online sales with an e-commerce market size of US$1,117 billion. This evidence, coupled with generally high levels of mobile connectivity in many developing countries, suggests that it is possible that much developing world consumer growth in the coming years will be in the e-commerce space, with no need for an interim period of brick-and-mortar retail first.

With an e-commerce market size of $46 bn in the same year, India was well behind, but that figure is still significant and is forecast to grow exponentially in the coming years. But whether e-commerce is as widespread in the rest of the developing world as it is in China or not, growth in warehousing is assured.

The second factor driving the growth of warehousing has been strong e-commerce growth in the developed world, lately itself driven hard by the COVID-19 pandemic. The US Census Bureau estimated that, in 2019, online sales accounted for 10 percent of all retail sales.

That figure increased by 50 percent during the pandemic year of 2020. In February 2021 Amazon reported its highest ever revenues, with over $100 bn in quarterly sales. As a very rough estimate, for every $1 bn of online sales, 1.3 million ft² of warehousing is needed to support it.


Though the need for warehousing is growing exponentially, there is still plenty of room for growth insofar as latest (2020) figures show that only five countries account for 57 percent of the global warehouse footprint. Those countries – China, the United States, Japan, India, and Germany, will see that share decline only slightly to 55 percent by 2025.

If we compare the USA with the entire rest of the world (RoW), the warehousing imbalance comes starkly into relief. The US has less than one tenth of the population of the RoW, but has approximately the same square footage of warehousing, and a similar number of employees in the sector – even though labour costs are about four times higher in the US than in the RoW. 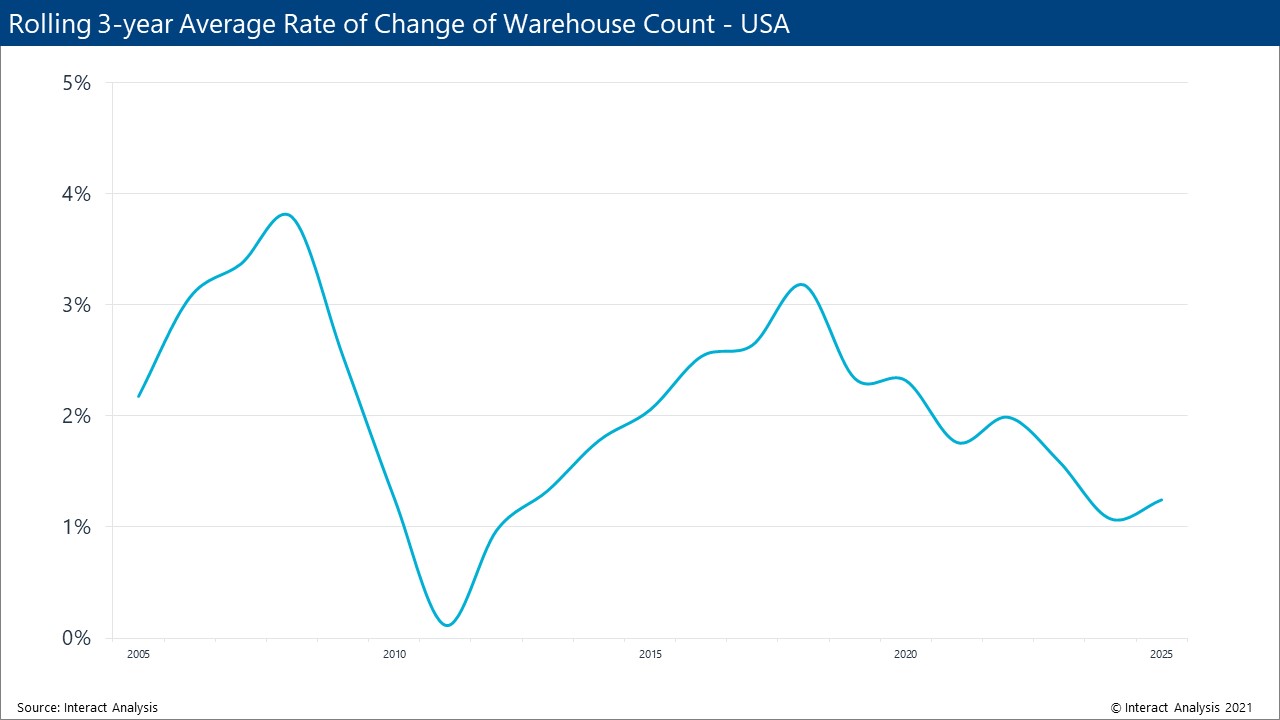 Warehouse growth in developing countries will be driven by the emergence of populations from poverty as workforces are upskilled and the accompanying greater disposable personal income creates growth in demand for consumer goods and packaged food and beverage products.

Another factor driving growth in the warehouse sector in developing countries is the diversification of supply chains away from China as companies such as Asia’s biggest warehouse operator, GLP, turn to countries such as Vietnam, which have dealt well with the pandemic and have emerging middle-income populations.

Demand for consumer goods in developing countries will fuel the need for warehousing to feed retail outlets, but the boom in e-commerce, requiring fulfillment warehouses for direct-to-consumer delivery bypassing physical retail locations will put massive pressure on demand. It is expected that 30,000 new warehouses will be installed in the next five years, but it is interesting to note that the actual number of warehouses will increase somewhat slower than the global warehouse footprint, as warehouse sizes increase over time.


It is estimated that in 2020 8.5 million full-time workers were employed in the global warehousing sector, and that this will grow to 13 million by 2025. The rise of e-commerce fulfillment warehouses is expected to make a significant contribution to demand for labour, with piece-picking fulfillment being five times as labour intensive as other sorts of inventory processing, such as palletized distribution. 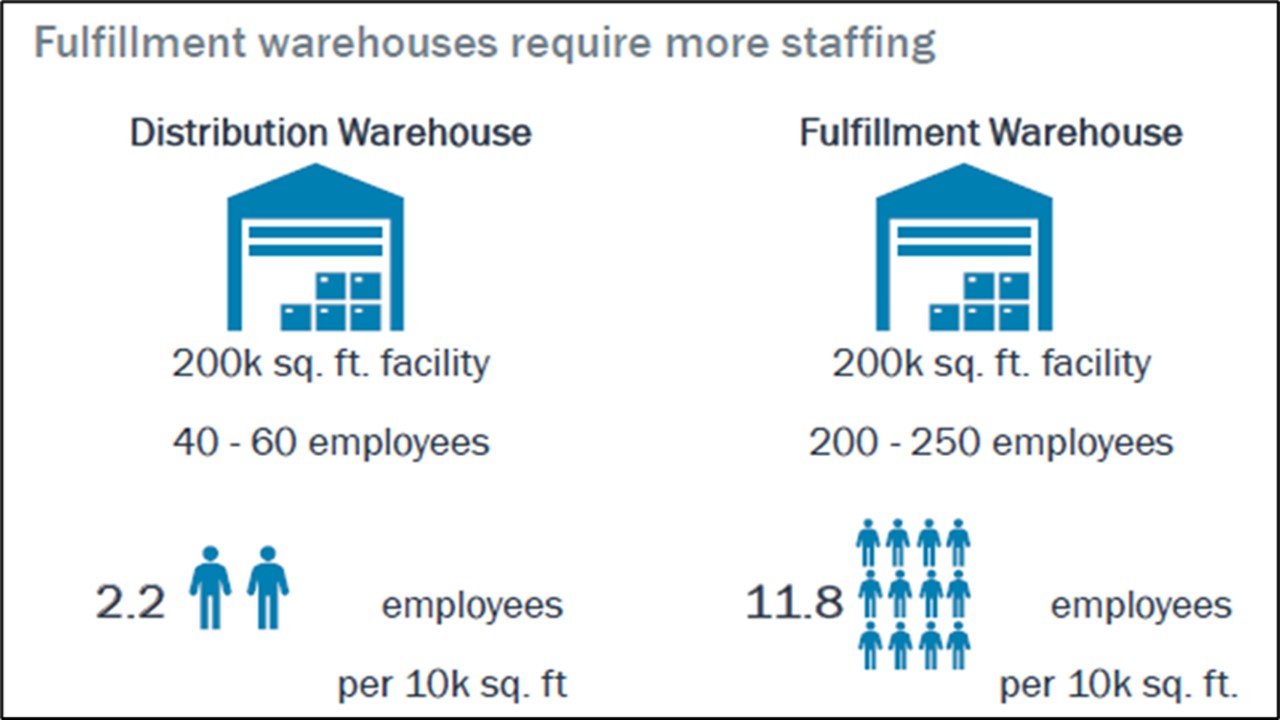 Warehouse labour shortages were already a trend pre-pandemic, and this has been turbocharged both in the short-term (due to surging e-commerce customer demand and the need for social distancing in warehouses), and in the long-term as the post-COVID global economy picks up steam. With an 11.2 percent CAGR, it is anticipated that the total spend on staffing for warehouses will increase rapidly as both the number of workers increase and the pay increases in order to attract staff.

That said, there is currently a huge disparity in pay, with 60 percent of warehouses across the globe being situated in areas where the average labour cost is under $10 per hour. The difference in average pay for workers in India and Switzerland is of an order of magnitude of 20X, in favour of the Swiss.

In spite of surging rates of warehouse automation, there is currently no predicted let up in terms of demand for workers. In fact, the trend for warehouse automation simply causes e-commerce – the warehouse market’s current main growth driver – to become more efficient and thus cut costs and grow faster. So, while fewer workers will be needed per square foot over time, the total number of workers will continue to grow for the foreseeable future.

This article was republished with permission.