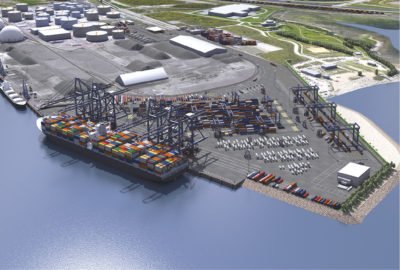 Laurentia will have an annual capacity of 700,000 TEU.

Plans to build and open an ultra-green, deep-water container terminal in Quebec City by 2025 are on track.

“Our hope is that we will have the necessary environmental approvals by August or September of this year (and) get construction started in spring 2022.”

The port is also finalizing $90 million in financial support from both the federal and provincial governments. “The total ask is $180 million,” Krusel said. “We’re confident we’ll get it because there is widespread consensus and support for this project.”

It will take three years to build the new terminal, which will use fleets of electric-powered equipment such as gantry cranes and automated stacking cranes. It claims it will be the greenest and most technologically advanced intermodal container terminal in North America.

It will be the third container terminal in Eastern Canada, in addition to Montreal and Halifax. Once open, the facility will have a throughput capacity of 700,000 TEUs.

According to Krusel, who came out of retirement in 2018 to lead Laurentia after spending 25 years as president and CEO of the Prince Rupert Port Authority, the planned deep-water facility will help Canada better compete with American ports for the growing volumes of container shipping traffic now entering Eastern Seaboard waters, much of it on mega ships from Southeast Asia that transit the Suez Canal.

“It is a more economical route,” said Krusel. “The result is that the West Coast of North America is losing container market share to the East Coast.”

According to Krusel, the impetus for Laurentia was the billions of dollars that the Port of New York and New Jersey began spending in 2017 to dredge waterways and raise the Bayonne Bridge to accommodate the larger hulls of the mega ships.

Since 2017, the percentage of containers that arrive in NY-NJ on ships of 13,000 TEUs and more has risen from less than one percent to more than 25 percent. The Port of Halifax received its first Ultra-class vessel, with a 15,000-container capacity in September 2020, after installing Canada’s largest ship-to-shore super post-Panamax crane in July.

“Laurentia is both an offensive and defensive strategy to help defend Canada’s interests,” said Krusel.

Montreal, he noted, is limited to ships of 6,000 TEUs and smaller, while Quebec City is 1,000 km further inland than Halifax.

“In intermodal, the cheapest form of movement is by ship, so you want to keep cargo onboard as long as possible and get it as close to market as possible to create a more economical supply chain system,” said Krusel. “Doing that can reduce overall shipping costs by 40 to 60 percent.”

He added that 90 percent of containers handled at Laurentia would be transferred from ships to rail and then directed to markets in Ontario and the American Midwest.

According to Krusel, the evident potential of the Laurentia project, which is modelled on the highly successful development of Prince Rupert as a major intermodal port on the Pacific, helped the Port of Quebec City land agreements in 2019 with its two heavyweight partners in the project: Hutchison Ports and Canadian National Railway.

According to the terms of the joint venture, the deal three partners will share construction costs for the new multi-user terminal, which will be operated by Hutchison.

Neither Hutchison nor CN would comment on their involvement in the Laurentia project.

However, top executives of both companies expressed enthusiasm for the project when the deal was announced.

“Hutchison is a world-class container operator and we are confident that we are partnering with a group that can make the project a success.”