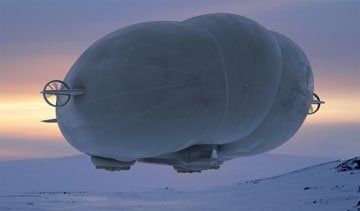 The only experience most people have with airships is the Goodyear blimp hovering overhead at major sporting events. So it’s hard to imagine airships becoming regular fixtures in our skies. They’re massive, lumbering and they fly at lower altitudes than airplanes. And as a mode of passenger travel, well that idea–for most people–went down with the Hindenberg tragedy.

But in certain segments airships are alive and well. The military uses newer generations for surveillance and heavy-cargo lifting, and smaller companies use them for advertising and small tourism roles.

But a new generation of airship–cargo airships–might take to the skies one day soon and completely change how we transport oversize cargo and consumer goods. In March, Aviation Capital Enterprises Inc announced an agreement with Lockheed Martin to design and build a family of hybrid aircraft (filled with helium) for heavy lift cargo.

Barry Prentice, professor in transport economics at the Asper School of Business at the University of Manitoba in Winnipeg, says that airships are poised to make a huge comeback. “We’ve got to look for more fuel efficient, less polluting forms of transport, and airships are shining stars in that regard,” he says.

To start Prentice says cargo airships will likely have a 20-tonne lift capacity. But that could reach 150 tonnes as the technology develops. Once airships are big enough they will carry loads across the oceans more economically than airplanes. A trip from Montreal or Toronto to Europe might take anywhere from 24 hours to 36 hours, but it’s faster than an ocean-going cargo vessel.

Cargo airships will also be ideal for reaching remote areas such as the Congo, the Amazon, Siberia, the Outback and Canada’s North. They don’t need long runways for take-off or landing.

Prentice believes they’ll be a solution to many of our modern logistics problems. They’ll be able to transport materials and goods to Northern communities year-round. Mining companies wouldn’t have to spend millions building roads–cargo airships could transport the heavy materials and equipment. With a cargo airship smaller mining deposits could be economical to retrieve.

But not everyone is convinced. Rick Erickson, aviation consultant and managing director of RP Erickson & Associates, believes that enough lift capacity already exists. He says there are freighters that can be chartered to transport oversize modules for mining, Formula One race cars, horses, helicopters and airplane fuselages. “There’s airfreight lift here and airfreight users–lots of them,” he says. “But they don’t need that highly specialized lift capability for the one-off projects.”

And of course there will be skeptics who say, “If this is such a great idea, why aren’t the skies filled with airships right now?” That has a lot to do with history, says Prentice. In the 1930s airships and airplanes were really “neck and neck” when it came to transporting passengers across the oceans. At that time, airplanes weren’t as safe as they are today.
But with the Second World War, trillions of dollars in today’s terms were poured into developing airplanes for military purposes. By the end of the war, there were high-altitude bombers and sophisticated jet engines–technologies that quickly migrated into passenger airplanes. After the war, there was a surplus of airplanes, oil was considered cheap, the environment and sustainability weren’t on anyone’s radar and everyone wanted speed–prime conditions for airplanes to take off.

In the last several years the cargo airship industry has mainly been held back by business confidence, says Prentice. The technology is there but no one wants to be first. But once cargo airships enter the scene, Prentice says there will be an explosion of designs and creativity. That’s what makes it so exciting at this point–no one knows yet where it’s going to go.

“There are so many things that could be possible once you have the technology and at this point it’s really hard to envision them because it doesn’t exist. But neither did the railways once, neither did containers once,” says Prentice. “And they changed trade, the way we do things and the way we look at the world.”