by Inside Logistics Online Staff February 28, 2019 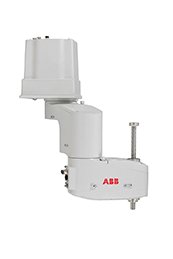 ABB has expanded its SCARA robot family with the launch of a compact, invert-mounted model for small parts assembly applications.

By mounting the IRB 910INV on the ceiling, manufacturers can increase the space efficiency and flexibility of each cell and handle more complex tasks even in cramped locations. The inverted mounting also allows the IRB 910INV to collaborate with other robots and machines simultaneously in the same footprint.

Using ABB’s motion control technology, the robot offers class-leading repeatable accuracy for applications including picking and placing, assembly and testing, electronics small parts assembly tasks such as screw driving, inserting or mounting components, and automated inspections for quality control. It will also be certified for cleanroom applications in the future.

“Since we introduced our SCARA robot line, customers have been interested in a ceiling-mounted version that would allow them to make more efficient use of available space,” says Per Vegard Nerseth, managing director of robotics at ABB.

“The IRB 910INV satisfies this need, as well as offering the same superior speed and accuracy they’ve come to expect from ABB.”

Two variants of the IRB 910INV are available, one with a maximum payload of three kg with 350-mm reach, and the other offering a maximum six-kg payload with 550-mm reach.