Company claims it is first to integrate feedback into dash 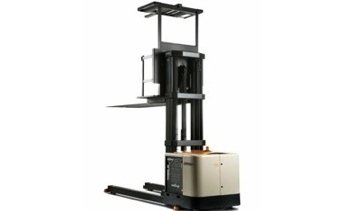 NEW BREMEN, Ohio: Crown Equipment Corporation has introduced a new version of its Crown SP 3500 Series Stockpicker that is designed to accommodate fuel cells. The Crown SP 3500 is the industry’s first forklift to integrate a fuel cell hydrogen level indicator onto the dashboard display, as well as feature programmable performance settings and advanced diagnostics for the fuel cell power unit.

The Crown SP 3500 Series Stockpicker is specifically engineered for narrow-aisle applications, moving from pallet handling to picking at heights to transporting. The truck designed for fuel cells maintains the same features and benefits presented by the standard model.

The newly designed SP 3500 builds on the innovation of the Crown PC 4500 Series pallet truck which was the first forklift to incorporate fuel cell controls and gauges into the dashboard of the truck. With the Crown SP 3500, the Crown Access 1 2 3 System Control is now connected directly to the fuel cell power unit to increase safety, efficiency and productivity. Access 1 2 3 is the electronic system that manages all truck functions and allows for two-way communication with the operator.

The system’s on-board display now features a fuel cell hydrogen level indicator that allows parameters to be set for a low fuel warning. Operators receive an alert when the fuel cell hydrogen pressure reaches a pre-determined level, based on size of the facility and distance to the facility’s hydrogen refueling stations. The alert can be adjusted to signify when between 2 and 25 percent of the hydrogen level remains. The truck also has a lift lockout feature that prevents lift when the fuel level reaches a pre-determined level below the initial low-charge alert. This feature protects the integrity of the fuel cell and encourages operators to immediately visit the hydrogen refueling station.

“The fuel cell version of the Crown SP 3500 is a major step forward in Crown’s continuing research-based efforts to increase fuel cell integration with the truck,” said Eric Jensen, director of new technology research and development, Crown Equipment. “Using the truck’s intelligence to alert the operator of the fuel cell hydrogen level will significantly improve efficiency and performance by eliminating the possibility of running out of fuel in the middle of a job or leaving the floor too early.”

The Access 1 2 3 display screen on the dashboard of the truck also calls attention to detailed information about fuel cell performance and allows authorized users to adjust performance settings. Technicians can use the dashboard display to view fault codes, including the last event code, for the purpose of maintenance and troubleshooting. A refueling mode uses a bar graph to show status of refueling. Since the byproduct of creating electricity from a fuel cell is water, a high-water warning alerts operators if too much water is in the holding tank, which can cause overflow onto the floor.