October 3, 2017
by Inside Logistics Online Staff

October 3, 2017
by Inside Logistics Online Staff 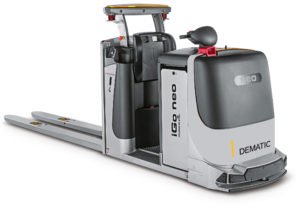 As a dual-use or hybrid AGV, the iGo neo can operate as both a traditional walkie-rider machine or as a fully automatic AGV. As an AGV, the iGo neo follows the operator at all times during the picking cycle, eliminating the time-consuming actions of getting on and off the machine during picking to move to the next location and also walking with product over distance to the machine.

The iGo neo represents a significant leap in ergonomic order fulfillment technology that can improve overall picking performance by up to 30 percent, and potentially even more when coupled with a Pick-to-Voice system.

“Dematic is excited to bring the iGo neo to North America,” said Bryan Knott, mobile automation product manager, Dematic. “We’ve seen a strong market demand for increasing mixed case picking efficiency, which leads to higher outputs of distribution centers. The iGo neo not only eliminates the need to drive the vehicle between pick positions, it does so without any infrastructure changes or additional equipment. It is truly an out-of-the-box solution that can be deployed and fully operational in hours, not days and is the first of its kind in the industry.”

The iGo neo is powered by STILL and will be sold in North America by Dematic. KION is the parent company of both Dematic and STILL.